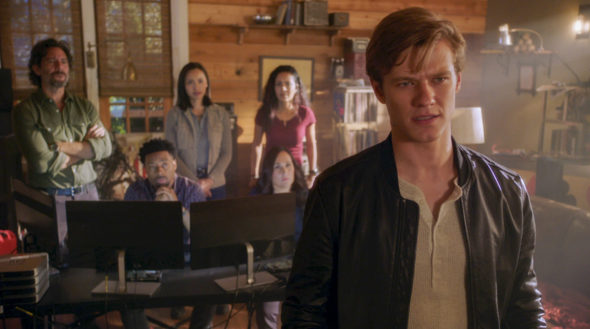 Could Mac solve a ratings problem? Has the MacGyver TV show been cancelled or renewed for a fifth season on CBS? The television vulture is watching all the latest cancellation and renewal news, so this page is the place to track the status of MacGyver, season five. Bookmark it, or subscribe for the latest updates. Remember, the television vulture is watching your shows. Are you?

Airing on the CBS television network, MacGyver stars Lucas Till, Tristin Mays, Justin Hires, Meredith Eaton, Levy Tran, and Henry Ian Cusick. A reimagining of the 1985 TV series, this show centers on Angus “Mac” MacGyver (Till), a 20-something adventurer. Mac creates a secret organization within the US government. There, he uses his vast scientific knowledge and an extraordinary talent for unconventional problem-solving to save lives.

The fourth season of MacGyver averages a 0.66 rating in the 18-49 demographic and 6.08 million viewers. Compared to season three, that’s down by 5% in the demo and down by 0.43% in viewership. Find out how MacGyver stacks up against other CBS TV shows.

Will CBS cancel or renew MacGyver for season five? For the first time, CBS held off premiering a new season of MacGyver until mid-season. That could be a bad sign but I suspect it has more to do with CBS not having much free space on its schedule. I’m confident that MacGyver will be renewed, if for no other reason than Blue Bloods and Hawaii Five-0 have been on the air for a decade each. When it comes time for one of them to end, the network will still have enough Friday dramas to fill the night’s three timeslots. I’ll update this page with breaking developments. Subscribe for free alerts on MacGyver cancellation or renewal news.

5/6/20 update: CBS has renewed the MacGyver TV series for a fifth season.

What do you think? Are you glad that the MacGyver TV show has been renewed for a fifth season? How would you feel if CBS had cancelled this TV series, instead?

I would really be disappointedi you cancel Macgyver. I love this show a whole lot. I love the cast. I was so disappointed that Jack left. Please do not cancel

So good worth watching every episode so good boost ratings more people to watch love it,

I love this show and hope it has 10 seasons. Got to see MacRiley for sure

Please boost ratings so good love it this show.

Yes I am very happy that MacGyver is being renewed.My husband and I love it