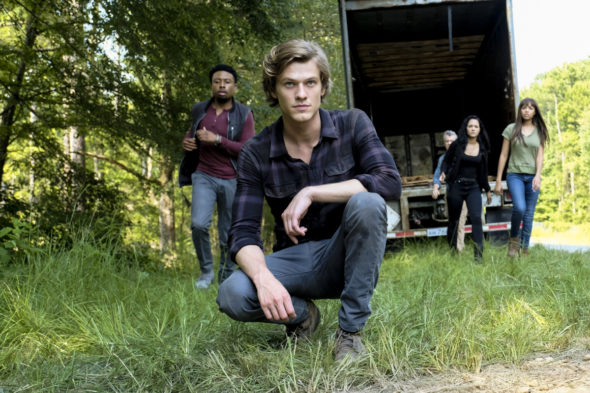 Has Mac come through in the clutch once again? Is the MacGyver TV show cancelled or renewed for a fourth season on CBS? The television vulture is watching all the latest TV cancellation and renewal news, so this page is the place to track the status of MacGyver, season four. Bookmark it, or subscribe for the latest updates. Remember, the television vulture is watching your shows. Are you?

A CBS action-adventure series, MacGyver stars Lucas Till, George Eads, Tristin Mays, Justin Hires, and Meredith Eaton. The reimagined drama centers on Angus “Mac” MacGyver (Till), a 20-something adventurer. Mac creates a secret organization within the US government. There, he uses his vast scientific knowledge and an extraordinary talent for unconventional problem solving to save the world.

The third season of MacGyver averaged a 0.70 rating in the 18-49 demographic and 6.11 million viewers. Compared to season two, that’s down by 16% and 11%, respectively. Find out how MacGyver stacks up against the other CBS TV shows.

Will CBS cancel or renew MacGyver for season four? Though the ratings are down, I can’t see them cancelling this show this time around. The network will want more episodes for the syndication package. I’ll keep an eye on the Nielsens and update this page with breaking developments. Subscribe for free updates on any MacGyver cancellation or renewal news.

What do you think? Are you glad that the MacGyver TV series has been renewed for a fourth season on CBS? How many seasons do you think this CBS TV show will last?

I thought since CBS brought back reruns of MacGyver and used this series as a time filler that it was cancelled! Now my understanding, they have okayed it foir a fourt season! This is a very good decision!

Don’t care for the show . Like George so though

I think you should bring Jack back. Jack and Mac were good with each other it made the show so much better. I really enjoyed the show then but now I don’t watch it anymore.

watched the last episode, if you are going to do Marine uniforms you need to do a better job the Marine major was so far out of uniform it wasn’t funny. just like “The Code”

I will be very upset if MacGyver doesn’t come back on it does aggravate me when it comes the same time as the shows on CW I wish you would come on at 9 p.m. on Fridays like last time but then you changed it the time and it interfered with my shows on CW and I was very angry because I like that too I get tired of everybody laughing shows over everything is on at 7 p.m. there’s about six shows that I would like to watch in one night

Best TV show on TV! I love every character! Thank you for renewing it!!

Im so glad. Its coming back one of my favorite shows.

Time to cancel this garbage

MACGYVER IS ONE OF THE BETTER SHOWS ON TV I HOPE IT COMES BACK SOON!

The old series was focused on the science. This series is focused only on the spectacle. Cancelled or renewed, I’m done with it.