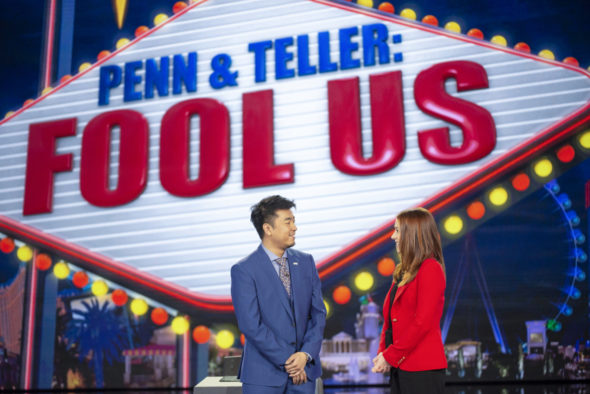 It is about to look real holiday like on The CW. The network announced for all their upcoming holiday specials, and it looks like Penn & Teller: Merry Fool Us will help kick things off. A new holiday special featuring the pair will air on November 29.

Other specials include Masters of Illusion: Christmas Magic 2019, the Hollywood Christmas Parade, and iHeartRadio Jingle Ball 2019. The CW revealed more about their holiday specials in a press release. Check that out below.

On Friday, November 29 (8:00-9:00pm ET), the one-hour special GRANDMA GOT RUN OVER BY A REINDEER returns to The CW. Based on the hit song that became a worldwide holiday phenomenon, this goofy and heartwarming adventure features young Jake Spankenheimer on the quest of a lifetime to track his missing Grandma down on Christmas Eve to prove that Santa Claus is indeed real. Michele Lee (“Knots Landing”) provides the voice of Jake’s greedy Cousin Mel and recording artist Elmo Shropshire provides the narration. An encore presentation of GRANDMA GOT RUN OVER BY A REINDEER will air on Wednesday, December 18 (8:00-9:00pm ET).

The all-new special THE CHRISTMAS CAROLER CHALLENGE premieres Sunday, December 15 (8:00-9:00pm ET). Hosted by Dean Cain and Laura McKenzie, the six-episode hour-long Christmas caroling competition series featuring 12 extraordinary Christmas carol groups, each with their own stylized brand of performance, in celebrating the great Christmas music we have all come to love. We’ll meet these groups from the most elaborate ultra-traditional virtuoso performances to those with the most unexpected twists on the classic Christmas carol. Each group which will be judged by three celebrity judges. This all-new special is produced by Associated Television International.

On Monday, December 16 (9:00-10:00pm ET), Kevin Frazier (“Entertainment Tonight”) and Keltie Knight (“Entertainment Tonight”) return to host GREATEST HOLIDAY COMMERCIALS COUNTDOWN 2019. This holiday special will countdown the 12 best holiday commercials ever – one for each of the 12 days of Christmas. In addition to the top 12, the special features other great commercials from both the U.S. and abroad, that capture the true spirit of the holiday season – from the heartfelt to the hilarious, from the outstanding to the ridiculous. Executive producers are Robert Horowitz and Lewis Fenton and produced by JUMA Entertainment. An encore presentation will air Tuesday, December 24 (9:00-10:00pm ET).

The all-new special DOGS OF THE YEAR will air Tuesday, December 17 (8:00-9:00pm ET). This special is hosted by Kevin Frazier and Nischelle Turner from the American Kennel Club Museum of the Dog in New York City. The special counts down the Top 10 dog stories of 2019, celebrating the dogs that go above and beyond, that leave their mark on society, and achieve the nearly impossible. Dogs that have climbed mountains, soothed burn victims, helped inspire an NHL team to a Stanley Cup, and have gone viral with their message of love. Executive producers are Robert Horowitz, Josh Greenburg and Lewis Fenton. Produced by JUMA Entertainment.

On Thursday, December 19 (8:00-9:30pm ET), The CW will air iHEARTRADIO JINGLE BALL 2019, a 90-minute holiday music event that celebrates the season with performances by the year’s biggest recording artists. This star-studded concert event will feature performances from many of today’s hottest musical stars. An encore presentation of iHEARTRADIO JINGLE BALL 2019 will air on Wednesday, December 25 (8:00-9:30pm ET).

On Friday, December 27 (9:00-10:00pm ET), The CW will air POPSTAR’S BEST OF 2019. Presented by Associated Television International and based on polls from Popstar Magazine, host Elizabeth Stanton will count down the greatest and most memorable moments and trends of 2019.”

What do you think? Are you planning to check out this year’s batch of holiday specials?