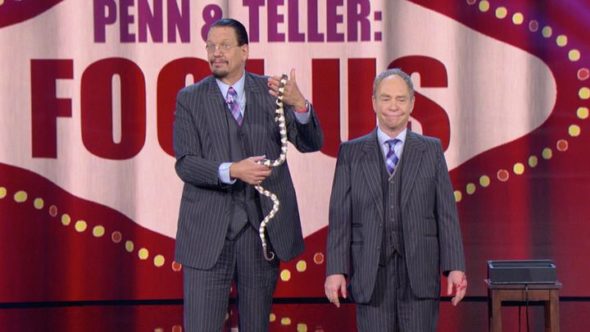 This is no trick. The CW has renewed the Penn & Teller: Fool Us TV series for a sixth season. The new episodes will air during the summer of 2019.

The series originated on ITV and premiered in 2012 in the UK. The series was cancelled and The CW aired the episodes in the United States a couple years later. They performed well enough for the network to order a second season and it’s become a staple of The CW’s summer schedule ever since.

The fifth season recently finished airing and averaged a 0.31 rating in the 18-49 demographic with 1.34 million viewers. While the ratings were lower than those of season four, Penn & Teller: Fool Us was the network’s highest-rated summer series.

Today, The CW announced that series Burden of Truth, Masters of Illusion, The Outpost, and Whose Line Is It Anyway? will also be returning in Summer 2019.

What do you think? Do you enjoy watching the Penn & Teller: Fool Us series on The CW? Will you be watching season six?

I really like watching Penn and Teller!! I want to watch them again, when will they be back on tv?

Love the show, when will be airing?

I’m fascinated by magic performances, so I really enjoy watching the magicians that appear on Penn & Teller. I really like it when the magician can fool P&T.

I got to go to one of the recordings in Vegas in March, the place was packed, seeing it live and all that goes on inbetween takes was also fun, would definatly go again and since tickets for the shooting of the tv series are free I would definatly go again although I have also been to a paid non televised performance where we got to meet them both in person and yes teller does speak. but… in the paid for show there was no other performers who fooled them in any show which I was definatly expecting. I for… Read more »

A wonderful show for anyone who enjoys watching Magicians performing. Unlike magicians touring the world and performing, when I, a Senior, used to go and watch before the advent of television, it’s a treat to sit at home watching their acts, wondering how was it done,- free! The best part is to watch one perform and fool Penn and Teller. Some have done it twice with a different “trick” Shin-Lim’s astounding performances should make him one of the best magicians in the world. I thank the CW for continuing to show it during the summer. The price for having the… Read more »

I love Penn and Teller’s Fool Us. I’m generally not a fan of what most people call “magic acts” but the duo have attracted illusionists from far and wide and presented it in an interesting, engaging, and funny offering that (with few exceptions) is something that is missing from television, in general . . . good, clean entertainment.

After a few weeks of not seeing it in my local listings, I did a Google search to find this information provided here. It was a relief to see that the show had not been cancelled. Can’t wait for the new season.

Great great show, I cannot get enough of it. Wonderful, entertainment and also that’s what this generation needs…captured AWE and ability. Not a video game no! It really a human ( s) amazing talent and skill….applied and knowledge…THANK YOU THANK YOU THANK YOU

Scan the television guide every week for Fool Us. We will stay home just to watch the show.

I love this show, Can’t wait for the next season to start!

I love Penn & Tellers Fool Us! The best show on TV right now! I would watch it every night. Such funny & talented guys.

Penn and Teller: Fool Us is one of my favorite Tv shows. It’s hilarious, informative (on magic tricks)and just amazing. I enjoy every episode and love seeing the magicians from anywhere and everywhere-all with their own unique view of magic.