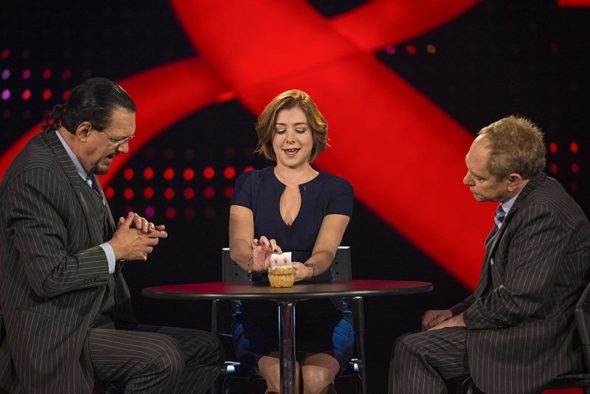 This isn’t a trick. Today, The CW announced they’ve renewed Penn & Teller: Fool Us for a fifth season.

Season five of Penn & Teller: Fool Us is expected to premiere on The CW in summer 2018. Meanwhile, season four concludes on November 30th at 9 p.m. ET/PT.

PENN & TELLER: FOOL US, hosted by actress Alyson Hannigan (“Buffy the Vampire Slayer,” “How I Met Your Mother”), is created and executive produced by Penn Jillette, Teller, Peter Adam Golden, and Andrew Golder in association with 117 PRODUCTIONS and September Films (part of DCD Media).

Hosted by actor Dean Cain (“Supergirl,” “Lois & Clark: The New Adventures of Superman”), MASTERS OF ILLUSION features amazing magic performed by cutting-edge illusionists and escape artists, and performers in each episode displaying skills ranging from perplexing interactive mind magic to hilarious comedy routines. Live audience members and viewers at home will be baffled by the astounding skills of these modern illusionists.

Based on the wildly successful U.K. format, which also spawned a previous incarnation in the U.S. that ran for eight seasons on ABC, WHOSE LINE IS IT ANYWAY? is executive produced by Dan Patterson, Mark Leveson, Jimmy Mulville, Ryan Stiles, Wayne Brady and Colin Mochrie. Created by Dan Patterson and Mark Leveson, WHOSE LINE IS IT ANYWAY? is from Angst Productions and Hat Trick Productions.”

What do you think? Do you watch Penn & Teller: Fool Us? Are you glad it’s been renewed?

It’s my favorite show on t.v. ! And has been for year’s. So glad its renewed. Just wish they bring some killer acts and routines.