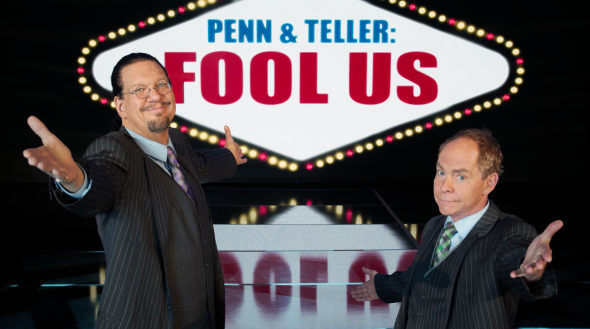 Fans will finally get to see the conclusion to this season of Penn & Teller: Fool Us. Recently, The CW announced they’ve rescheduled the TV show’s season four finale for later this month.

The season four finale of Penn & Teller: Fool Us will now air on November 30th at 9 p.m. ET/PT. The finale was originally set to air on in October but was postponed because of the shootings in Las Vegas.

Read more details from The CW below:

SEASON FINALE – Aspiring magicians are invited to perform their best trick to try and fool the world-famous team of Penn & Teller, who will get to see the trick only once and have to immediately try to work it out. Anyone who succeeds wins the right to perform with Penn & Teller in their celebrated show at the Rio Hotel & Casino in Las Vegas. The live studio audience and the TV audience watch along with Penn & Teller as they try to figure out the secrets. The magicians featured in the episode include Patrik Kuffs, Lamanske, Adam Wilber and Hector. Alyson Hannigan (“How I Met Your Mother”) serves as host (#406). Original airdate 10/02/2017.”

What do you think? Do you watch Penn & Teller: Fool Us? Are you excited for the season finale?