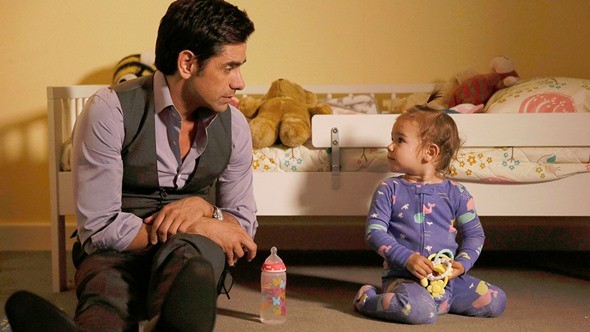 Good news for Grandfathered fans. TVShowsonDVD reports the cancelled FOX series will be released on DVD later this month.

The comedy starred John Stamos as Jimmy Martino, a successful restaurateur and lothario whose world is turned upside down when the son he never knew he had, twenty-something Gerald (Josh Peck), appears with his young daughter, Edie. The cast also included Paget Brewster, Christina Milian, Kelly Jenrette, and Ravi Patel.

The first and only season of Grandfathered will be released on DVD on November 24th.

What’s the fastest way to put the brakes on a cruise-controlled bachelor lifestyle? Fatherhood? Guess Again. Television icon John Stamos stars in a new comedy about the ultimate bachelor who discovers he’s not only a father, but a grandfather.

VEI (Visual Entertainment Inc.) has announced to us that on Friday, November 24th they will release the short-lived Fox Network comedy, Grandfathered – Season 1, on DVD! Produced by ABC/Disney, the DVD rights have been picked up by VEI, who will provide the show’s one-and-only season on disc for $29.99 SRP. Starring John Stamos (Full House, ER) and Paget Brewster (Criminal Minds, Community), it ran for 22 half-hour episodes. “

What do you think? Have you seen Grandfathered? Do you think FOX should’ve renewed it for a second season?

This, along with The Grinder is a show that was cancelled way too early and was way better than a lot of other lower grade shows out there.

Totally agree!!
I loved both shows!

FOX was foolish for cancelling this.