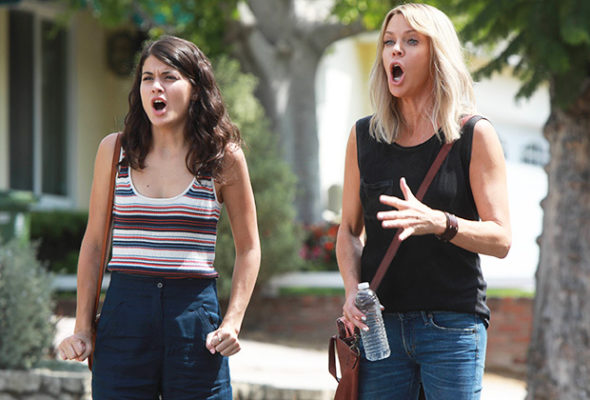 FOX may have cancelled The Mick, but what would have happened if it was renewed? Recently, creators John and Dave Chernin spoke with TVLine about their ideas for season three.

In the interview, John Chernin revealed they were “blindsided” by FOX‘s decision to cancel The Mick and there were plans for another season:

Everybody was saying we were coming back, so we were pretty blindsided by that. The general plan was to catch up months after the accident. Sabrina was going to be pretty f–ed up. We think [Sofia Black-D’Elia] is the most incredible actress, so we wanted to basically have Sabrina learn how to walk and talk again.”

We worked really hard in Season 2 to make Jimmy a likable character, which we did by having Mickey s–t all over him. …  In Season 3, we wanted to tip the seesaw in the other direction, having Jimmy be the a–hole in the relationship.”

What do you think? Did you watch The Mick? Would you have watched a third season?

Bring it back please!!!

Bring back the Mick. Super funny show. We loved it

SOMEONE BRING BACK THE MICK!!!!!!! This show is absolutely hilarious. I’m so confused as to why FOX cancelled it. Hulu or Netflix should bring back.

This was a wonderful show with original plotlines and full character development. It made my family laugh out loud; something that is increasingly rare. I have no doubt that season 3 would have been worthy of the first two. The only other original show has been Single Parents….

My family absolutely loved this show! The characters were so funny and different from other comedies. Please bring this one back!

Bring the Mick back!!! Great show, Im rewatching it right now and hopefully Fox will see how much people love it and bring it back for season 3!!! I love all the actors/actresses and their characters on the show. We should start a petition!

The best shows never get the publicity they deserve. Stumbled upon this on netflicks and since I’m a big fan of Olsen’s from sunny in Philadelphia I gave it a chance. Three days later… I’ve binge watched the entire series and am greatly disappointed at how the series ended. Best series I’ve watched in a long time. Great writing excellent acting and direction and make you laugh out loud slapstick lol ! So sad to see there are not more series to look foreword too☹️

Definitely our favorite show!! Hoping someone gets season 3 going!!!

I would have for sure watched season 3 of The Mick. Funny show with likeable characters. Very sad that it wasn’t renewed.

The mick was one of the greatest comedies on television. I loved it. PLEASE BRING IT BACK!!!!!!

Wish I could’ve at least seen the 3rd season on Hulu or Netflix. Loved the show binge watched it for at least 3 days lol. It’s funny show that always has a good ending to every episode and also has good different story lines every episode

I love that show and was just looking forward to a third season,Im disappointed in Fox for that move.