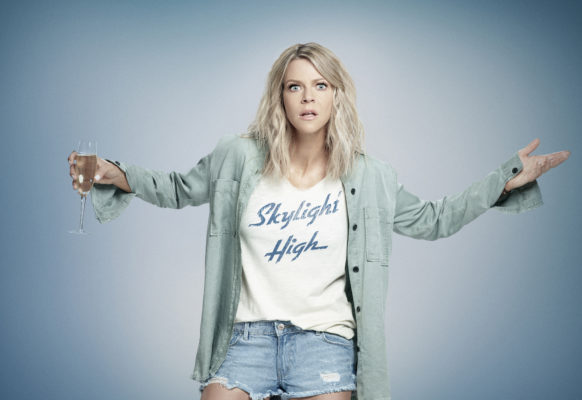 How well does Mickey Murphy remain in control during the second season of The Mick TV show on FOX? As we all know, the Nielsen ratings typically play a big role in determining whether a TV show like The Mick is cancelled or renewed for a third season. Unfortunately, most of us do not live in Nielsen households. Because many viewers feel frustration when their viewing habits and opinions aren’t considered, we’d like to offer you the chance to rate all the season two episodes of The Mick for us here.

A FOX sitcom, The Mick stars Kaitlin Olson, Sofia Black-D’Elia, Thomas Barbusca, Jack Stanton, Carla Jimenez, and Scott MacArthur. In the first season, grifter Mickey (Olson) was left to care for her sister’s spoiled little rich kids in affluent Greenwich, Connecticut. Season two finds Mickey in it for the long haul. She gets by with a little help from her sorta boyfriend, Jimmy (MacArthur), and Alba (Jimenez), the family’s live-in housekeeper. Mickey is determined to make through the tough times or black out. **Status update below.

What do you think? Which season two episodes of The Mick TV series do you rate as wonderful, terrible, or somewhere between? Should FOX cancel or renew The Mick for season three? Don’t forget to vote, and share your thoughts, below.

That was one of the funniest shows on tv. Every charcter were so talented. Please bring back. We need some laughs after 2020!

I was really disappointed to hear the show got cancelled. The mick was the only show I watched. I guess I’ll just go back to reading books now.

I LOVE this show! So nice to just laugh. Nothing like this show, Could have been bigger then Seinfeld. I watched all the long running shows From 90210, Friends, ER, Seinfeld, Give Me A Break the list of truly long distance shows that make you want to love them and know them and have them in your home is very to get on these days. The Mick had it all. They MUST bring back this “Real” unreality show so we can all laugh at ourselves and each other. Like we used to. The Mick gave us back the ahhh that… Read more »