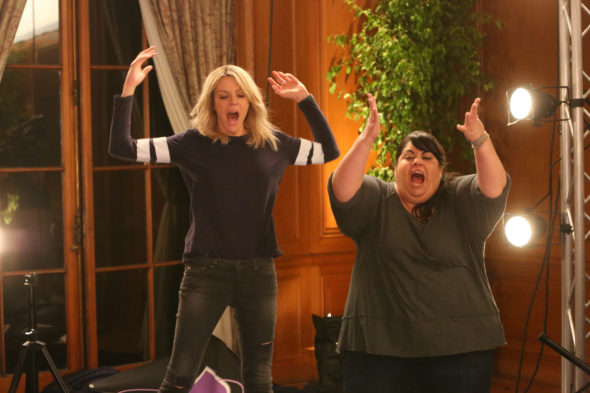 It seems Mickey Murphy still has the luck o’ the Irish. FOX has ordered an additional seven episodes for a full second season of The Mick TV show. This brings the sitcom’s season two order up from 13 to 20 episodes — seven more than it received for its freshman outing.

A scripted FOX comedy, The Mick stars Kaitlin Olson, Sofia Black-D’Elia, Thomas Barbusca, Jack Stanton, Carla Jimenez, and Scott MacArthur. It centers on Mickey (Olson), an ill-equipped grifter who is left to care for her sister’s spoiled children, in their Greenwich, Connecticut home.

The Mick: A Look at the Ratings

The second season of The Mick is averaging a 0.84 rating in the 18-49 demographic and drawing an average audience of 2.40 million viewers. Compared to season one, it is down by 24% and 19%, respectively. The full season order comes as a little bit of a surprise, since The Mick is 12th when sorted by its demo ratings and 14th in terms of total viewership, out of the 15 scripted  FOX TV shows we’re currently tracking.

Although FOX has not yet posted this news on its press site, Deadline confirms the network has ordered the additional episodes.

What do you think? Are you still watching The Mick TV series? Did you expect it to receive a full season two episode order? Should FOX cancel or renew The Mick for season three? Let us know, below.

I was and still am extremely sad when they canceled the mick. This show was hilarious!! All those actors were brilliant and played their characters so perfectly. The very last episode was a huge shocker and was challenging to think how they could come back, BUT I had complete faith in them! I believe this show could have had a good 5 seasons. Hopefully they can figure out how to do a spin-off cus I truly miss everything and every one on the mick!!

Please, END it. It is sexist, demeaning and just plain dumb. My husband and I were just watching the episode tonight with a young child playing a strip poker video game in a dive bar. Seriously? Then a young girl walking down the street with her brother meets up with the two young boys who stole the brothers shoes and tells the young girl if she wants the shoes back for her brother, she needs to flash them her tits. SERIOUSLY? This is NOT funny. It smacks of something HARVEY WEINSTEIN would do. It’s awful. PLEASE do us all a… Read more »

I agree that wasn’t one of the best episodes. Then don’t watch it – It’s different a little edgy and it IS a funny show- Just go back watching shows like 2 Broke Girls (I know they finally put that show out it’s misery it-thank goodness)Just trying to make a point and thats the first show that came to mind —-soooo stupid and predictable. The Mick is different-And if you don’t like it change the channel and watch a predictable cookie cutter dumb sitcom….PS Harvey Weinstein
Comparison?? Please!!

My name is noone

Please keep it. I hate when I find something that’s not the same old stuff formula sitcom plot it gets pulled.

Kathleen
Reply to  My name is noone

for a show with DECLINING ratings… not a smart move

Love The Mick! Really aggravating only 4 episodes for Season 2 tho! C’mon quit making me go back to look for more :)UBFGD