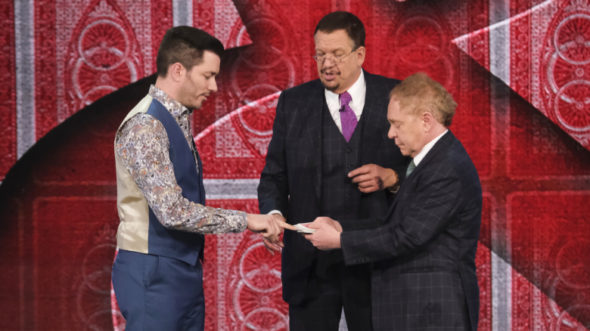 The CW has ordered more magic ahead of the holidays. The smallest broadcast network has renewed the long-running Penn & Teller: Fool Us TV series for an eighth season.

The seventh season resumes on January 8th. It’s unclear how many installments remain in season seven or if season eight will launch this summer or later, as part of the 2021-22 broadcast season.

What about the network’s other unscripted series? The CW also renewed World’s Funniest Animals for a second season today.  Whose Line Is It Anyway? will launch its 17th season (the ninth on The CW) on January 8th. The fate of Masters of Illusion is still up in the air.

What do you think? Do you enjoy the Penn & Teller: Fool Us TV series? Will you be watching when the show returns in 2021?

There are only a handful of TV shows that I watch all the time and Penn and Teller Fool Us is one of the few I watch every episode. Sometimes I forget that it’s on but with the CW app that’s not a problem and I watch it on that. Keep this show going as long as Penn and Teller want to do it. Thank You for the entertainment.

Bring back penn and teller . I love the show

Absolutely will be watching it , love the show and it’s magicians .Penn and Teller are awesome just found this series like in august of 2020 been hooked on it since as well as masters of illusions !! Hope they renew that one to!

DISH cancelled CW, so I will be cancelling DISH to continue to watch Penn & Teller. I am a 79 yr old magician,

Love to be entertained by the Magicians on the show…We need to laugh during this Pandemic…Masters of illusion also…Please don’t cancel either show…..Thank You