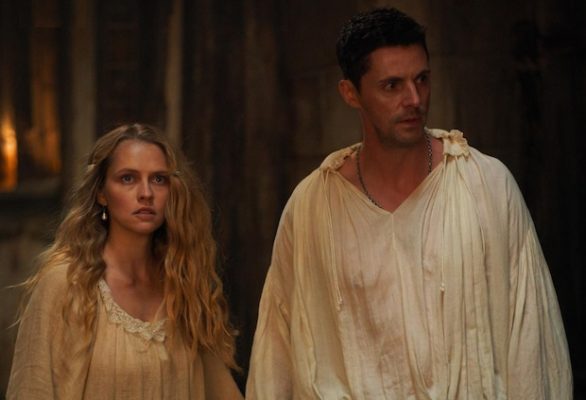 It’s been a year and a half since the first season of A Discovery of Witches aired on AMC and BBC America. A premiere date for season two has been announced but it’s not returning to regular television. In the United States and Canada, season two will stream on AMC Networks’ streaming services Sundance Now and Shudder beginning Saturday, January 9, 2021.

The 10 new episodes find Matthew (Goode) and Diana (Palmer) hiding in time in the fascinating and treacherous world of Elizabethan London. Here, they must find a powerful witch teacher to help Diana control her magic and search for the elusive Book of Life.

Exclusive North American Premiere on Sundance Now and Shudder on Saturday, January 9, 2021 — one day after the UK Premiere, with a new episode premiering every following Saturday.

Matthew (Matthew Goode) and Diana (Teresa Palmer) hiding in time in the fascinating and treacherous world of Elizabethan London – here they must find a powerful witch teacher to help Diana control her magic and search for the elusive Book of Life.

Featuring stunning lead performances from Teresa Palmer (Hacksaw Ridge) and Matthew Goode (Downton Abbey), the most successful series in Sundance Now’s history, supernatural thriller A DISCOVERY OF WITCHES, Season 2 makes its highly-anticipated US and Canadian premiere on AMC Networks’ streaming services Sundance Now and Shudder. Certified Fresh on Rotten Tomatoes and one of Sky One’s biggest dramas, A Discovery of Witches, Season 2 will be available to stream exclusively on Sundance Now and Shudder, including their offerings within the AMC+ bundle, beginning Saturday, January 9, 2021, just one day after its UK Premiere, with a new episode available every following Saturday. Adapted from Deborah Harkness’ All Souls trilogy, the 10-part second season finds Matthew (Matthew Goode) and Diana (Teresa Palmer) hiding in time in the fascinating and treacherous world of Elizabethan London – here they must find a powerful witch teacher to help Diana control her magic and search for the elusive Book of Life. Sundance Now is AMC Networks’ premiere streaming service for engrossing true crime, heart-stopping dramas and fiercely intelligent thrillers from around the world. AMC Networks’ Shudder is a premium streaming video service, super-serving members with the best selection in genre entertainment, covering horror, thrillers and the supernatural.

In Elizabethan London, Matthew and Diana’s romance faces a barrage of new threats. Diana’s unleashed magic takes a dark and frightening turn, while Matthew struggles to re-inhabit the dangerous life he led over four centuries ago. They must overcome deep personal fears and jealousies, baring their darkest secrets to one another if they are to stay alive, stay together and find a way back to present day.

While Matthew and Diana hide out in Elizabethan London, back in present day, Diana’s beloved aunts, Sarah (Alex Kingston, Doctor Who, ER) and Em (Valarie Pettiford, Half & Half), must take shelter with notorious witch hunter Ysabeau de Clermont (Lindsay Duncan, The Honourable Woman) at her ancestral home, Sept-Tours. Meanwhile, in Oxford, Marcus (Edward Bluemel, Killing Eve) and Miriam (Aiysha Hart, Line of Duty) take on Matthew’s mantle to protect daemons Nathaniel (Daniel Ezra, All American) and Sophie (Aisling Loftus, War & Peace), whose pregnancy is advancing. And Gerbert (Trevor Eve, Waking the Dead), Knox (Owen Teale, Game of Thrones), Satu (Malin Buska, The Girl King) and Domenico (Gregg Chillin, Da Vinci’s Demons) are determined to hunt down every clue they can to Diana’s and Matthew’s disappearance, and the secrets their allies are keeping from them.

Made by Bad Wolf Productions, A Discovery of Witches has been adapted for screen by Pete McTighe (Doctor Who) and Susie Conklin (The Musketeers), who are also executive producers. The co-founders of Bad Wolf, Jane Tranter and Julie Gardner, and Lachlan MacKinnon are executive producers along with Deborah Harkness and Farren Blackburn. Farren Blackburn (The Innocents), Philippa Langdale (Harlots) and Jonathan Teplitzky (The Railway Man) are the directors. Filming took place in South Wales and on location in Oxford and Venice.

What do you think? Have you seen the first season of the A Discovery of Witches TV series? Do you plan to watch the second season?

Yay! It’s back on cable! Just read about the news on Google. Super excited! And, best of all, they are playing the season, not this one teaser show like last time! Awesome! Looking forward to watching!

You totally suck. Cannot watch the new season of this show on amc and I am very mad about it. You guys totally SUCK ASS!

Love discovery of witches but I think it’s disgusting that they are now putting these shows on stations that you have to purchase to watch these shows when they aired on regular cable!!! As much as I like it I won’t be paying to watch it!! So sad that everyone is so money hungry shame on all of you!!! Especially since people are struggling during this pandemic to make ends meet! How pathetic!!! Bring it back to AMC!!!!

Only if u put it back on and. It was a good show only got to see two episodes of it I am disappointed in u and thanks for taking it off. I am not paying when u had it on regular cable

Yes but only if it is cable.

Well, was very excited to see the first episode of season two on television. But nothing like having a manipulative tease so I can buy AMC+… I absolutely loved the show. Watched it this morning and anxiously checked next week, but, nope. Of course. . . Sorry. I don’t want to watch it anymore because of this greed spree everyone is on for online shows. Can’t afford it. And have other things more important to spend my money on. To bad. Loved the show…. very disappointed.

Loved the first season and was wondering if A Discovery of Witches would return to regular cable only to find that it will will be for extra pay only. Glad I got to watch S2 E1 for free and guess it was just a way for them to say, see what you are going to be missing!!!! Very disappointed in AMC. That’s entertainment.

Loved the first season and was anxiously awaiting its return only to be told it is now for pay only. Very disappointed in AMC. I’ll just read the books.

I enjoy watching this show, I hope this season is not the end. Please consider more series to watch. I view the first season and i will continue to view Discovery of Witches. Great Show

Not watching. I won’t be manipulated into paying AMC+. PUT BACK ON TV! Read the books, loved them, watched the first season on tv, loved it too. Now I find I have to pay more to watch on AMC+? No thanks. Guess I won’t bother supporting anymore. Such a shame that greed got in the way.

I did love this show… I read and fell in love with the books. Got the DVD for the first season. And, now. Pft! I am wasting my time. I will not be manipulated into moving to “streaming” just because of your show. I’m sorry. That’s just wrong. You should be paying me for leaving a comment! I hope somebody in the industry can see this. Not that anyone would care, right? It’s all about the money, is it? Well. Sorry. Not interested. I’m not going to be promoting greed. I was really looking forward to this show and I… Read more »

I don’t steam,no computer , I only have TV, F the people who like manipulating viewers.

I just finished season one on Prime Video. Now, you go and say I have to have to have AMC to watch the second season. The Walking Dead pulled the same stunt.