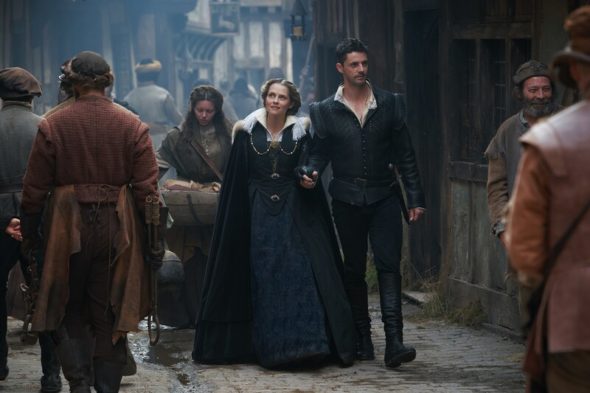 What’s in store for A Discovery of Witches? A new image and casting details have been released for season two of the AMC TV show.

The supernatural drama, which airs on Sky One in the UK, takes place in a world where witches, vampires, and daemons pass as humans. The cast includes Teresa Palmer and Matthew Goode.

Season two of A Discovery of Witches will feature new cast members, including Steven Cree, Sheila Hancock, James Purefoy, and Paul Rhys. The Sky One/AMC series has already been renewed through season three.

AMC has not yet announced a premiere date for season two, but you can read more info from Sky One below:

Fans of A Discovery of Witches are set to be transported to Elizabethan England in the second season of the hit Sky original drama, adapted from Deborah Harkness’s bestselling All Souls trilogy and currently being produced in Cardiff by award-winning production company Bad Wolf.

This exclusive first look image from season two, shows Matthew (Matthew Goode, Downton Abbey) and Diana (Teresa Palmer, Hacksaw Ridge) on the streets of Elizabethan London, where they are hiding in time from the Congregation. Here in Elizabethan London they must find a powerful witch teacher to help Diana control her magic and search for the elusive Book of Life.

Cree stars as Gallowglass De Clermont, a vampire and soldier of fortune who is particularly fond of his uncle, Matthew. James Purefoy plays the role of Philippe De Clermont, founder of the Congregation, commander of the Knights of Lazarus, mate of Ysabeau, and stepfather to Matthew. Paul Rhys is Andrew Hubbard, the vampire ruler of all creatures in London in 1590 and Sheila Hancock appears as elder witch Goody Alsop.

Alongside the Elizabethan action, back in the present day, Diana’s beloved aunts, Sarah and Em, must take shelter with notorious witch hunter Ysabeau De Clermont at her ancestral home, Sept-Tours. Meanwhile, in Oxford, Marcus and Miriam take on Matthew’s mantle to protect daemons Nathaniel and Sophie, whose pregnancy is advancing. And Gerbert, Knox, Satu and Domenico are determined to hunt down every clue they can to Diana’s and Matthew’s disappearance, and the secrets their allies are keeping from them.

Cameron Roach, Sky Studios Director of Drama, said: “After the success of season one, we are really excited for the next instalment of A Discovery of Witches, as we continue to follow the love story of Diana and Matthew and their adventures in Elizabethan London. We have a great cast lined up and a unique historical setting, which we hope will further enchant fans. The hit fantasy series joins a host of new Sky original drama’s we have coming to Sky One this year”.

Jane Tranter, Executive Producer, Bad Wolf, added: “To have such high calibre talent joining an already exceptional ensemble is a testament to Deborah Harkness’ brilliant novels, Pete McTighe and Susie Conklin’s scripts and to the immensely talented cast and crew working to bring all to life. The bar was set high with season one but season two is already shaping up to take fans into a new realm as we follow Diana and Matthew into Elizabethan England. With cast like this they will not be disappointed.”

A Discovery of Witches season two is based on the ‘Shadow of Night’ novel from Deborah Harkness’s All Souls trilogy and will be coming to Sky One and NOW TV next year. Season one was the most popular series on Sky One last year, bewitching nearly 2million viewers and it was nominated for the ‘New Drama’ category at this year’s National TV Awards. BAFTA Cymru announced the nominations for the 2019 awards today and A Discovery Of Witches was nominated in two categories – Director, Juan Carlos Medina and Production Design, James North. The awards ceremony will be held on Sunday 13th October in Cardiff.

The show was commissioned by Zai Bennett, Managing Director of Content, Sky UK and Ireland, and Cameron Roach, Director of Drama, Sky Studios. Kara Manley is the executive producer for Sky. Made by Bad Wolf Limited, A Discovery of Witches Series two is written by Sarah Dollard (Doctor Who, Being Human), Susie Conklin (The Musketeers, Cranford) and Pete McTighe (Doctor Who) who also serve as executive producers alongside co-founders of Bad Wolf, Jane Tranter and Lachlan MacKinnon along with Deborah Harkness. The series is directed by BAFTA award winning Farren Blackburn (The Fades, Daredevil), Philippa Langdale (Skins, Waking the Dead) and Jonathan Teplitzkt (Broadchurch).

What do you think? Have you seen A Discovery of Witches? Will you watch season two?

Bad Wolf should be called Naughty but Delightful Wolf. The choices they make on production calls, is part of the reason I watch. A LOVE scene that begins with AMBER RUN belting out the bewitching song,”I Found Love”, is a titillating and relevant experience for a true lover of a GREAT STORY. Reading is not my thing, but a wonderful telling of a story, that I can do, and seeing and hearing a story that actually transports you, that I will always embrace. To the lead actors, “You are the BEAUTIFUL ones”, I smile with Naughty Wolf Delight. LOVE, LOVE,… Read more »

With Supernatural ending after 15 seasons, it’s great that ADOW may be a suitable replacement for this subject matter. The first season was just mind-blowing and I’m anxiously awaiting season two. Matthew and Teresa have great chemistry on screen and in my opinion, their characters are the love match on the small screen. Deborah Harkness has provided a rich tapestry of characters in her books and the All Souls Trilogy is an enormous source of story material for many series to come provided it continues to do well in the ratings. All the best to Deborah, the show, and cast… Read more »

I enjoyed Season One very much. And my daughter has read all of the books and is looking forward to Season Two as well. Love it! Hope it returns real soon!! Note: The cast does a tremendous job. Love Matthew Goode!

Love it. Have read books 4 times. I even purchased hardback and paperback editions, and bought the DVD and the kindle edition. I must have watched the first season 30 times already. Can’t wait for Season 2!

Love this show, can’t wait for it to start again. Great series, great actors as well.

Loved Season One and can hardly wait for Two and Three. Love 10 episodes vs 8, but wish it were 13. I’m happy with any. Have read all 3 books and can imagine the show. But, how much sex will they include?

I am looking forward to Season Two with great anticipation. Great series! Glad to see a Season Three is in the works. Thank you to all.

Yes, of course I will! I loved this series “Discovery of Witches”, It compels you to watch every episode . I can hardly wait for the Series to start