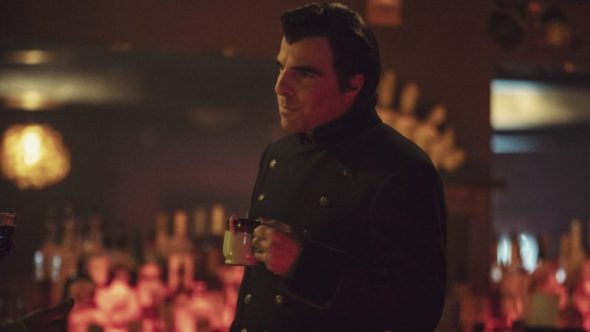 The evil of immortal Charlie Manx isn’t going away. At Comic-Con, it was announced today that the NOS4A2 TV show has been renewed for a second season by AMC. At the show’s panel, star Zachary Quinto said, “There’s so much in the book we haven’t dug into the show yet… so happy to come back for another run.”

A supernatural horror drama based on the Joe Hill novel, NOS4A2 stars Quinto, Ashleigh Cummings, Olafur Darri Olafsson, Virginia Kull, and Ebon Moss-Bacharach. From creator Jami O’Brien, the series centers on a young working-class woman named Victoria McQueen (Cummings). An artist, Vic develops the supernatural ability to find missing things. Soon, she is on the trail of the seemingly immortal Charlie Manx (Quinto) who sustains himself on the souls of children.

There are three episodes remaining in the first season, which airs on Sunday nights.

Tonight, 5:30 PM, Room 6A: I’m with show-runner Jami O’Brien, and stars Ashleigh Cummings and Zachary Quinto to talk about #NOS4A2. Just the thing to get you warmed up for tomorrow’s episode. Only three to go (and the final two air back-to-back on Sunday the 28th).

"I had a phone call with @AMC_TV this morning and so happy to share the exclusive news: we are on for a Season 2!" -Executive Producer @jami_obrien

Thank you to EVERYONE for coming to the #NOS4A2 @comic_con panel. YAY ON SEASON 2! pic.twitter.com/7JMg1UyLtU

What do you think? Have you been watching the NOS4A2 TV show? Will you be tuning in for season two?

The Season 2 of Nosferatu

I will tune in for season 2,although the producers should be careful not to drag it on.

I feel that one more would and should enable the story lines to be wrapped up nicely.

I will for sure tune in for season two of NOS4R2

Yes i will definitely be watching season 2

I love this show! So hooked! Can’t wait for season 2. Hope we don’t have to wait to long.

I’m on the fence about this show, it gets extra cheesy sometimes. I also record it because the parents get on my nerves so I fast forward all their parts.
I need something scarier than Christmas Land also for a second season.