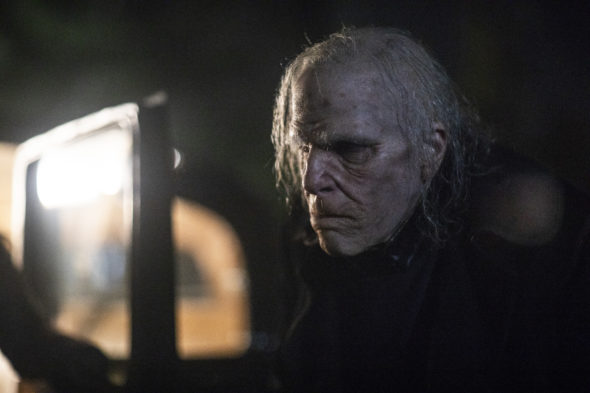 TV show description:
From creator Jami O’Brien, the NOS4A2 TV show is based on the 2013 Joe Hill novel of the same name. The supernatural horror drama unfolds in Haverhill, Massachusetts and centers on a young working-class woman named Victoria McQueen (Cummings). An artist, Vic develops the supernatural ability to find missing things. Soon, she is on the trail of the seemingly immortal Charlie Manx who sustains himself on the souls of children.

Vic’s parents, Linda (Kull) and Chris McQueen (Moss-Bachrach) are unhappy. One day, while they’re fighting, Vic takes off in the woods and happens upon an old wooden covered bridge. The thing is, that bridge had been destroyed years ago. She finds that by traveling “Shorter Way Bridge,” she can locate missing things. At first, it’s just a missing credit card, but the findings soon become more significant.

Evil incarnate, Charlie Manx uses candy and presents to lure neglected children into his vintage Rolls-Royce Wraith, with promises of a trip to a place he calls “Christmasland.” He tells them that there, every day is Christmas, and unhappiness is against the law. He then feeds upon their souls to remain young and alive.

One day, Shorter Way Bridge takes Vic to meet Iowa librarian Maggie (Jahkara Smith), who uses Scrabble tiles to prophesy. Like Vic, Maggie is a “strong creative” a person who has the ability to harness the power of imagination. Vic soon realizes she has to find the missing children. Unfortunately, Manx is a strong creative too. Since their powers connect them, Vic has to find a way to beat him without going insane or falling prey to him, herself.


What do you think? Do you like the NOS4A2 TV series? Should this AMC TV show have been cancelled or renewed for a second season?

Really love this show. This is one of the best shows ever offered on tv. I hope and pray that it is never put on a pay station that I would have to pay for, as I won’t go there. Please let this show on a network that everyone can get and enjoy. The plot keeps getting deeper every time I watch it, and I can honestly say that I can’t take my eyes off any part of it when watching this great series.

I want to see it renewed but someone please Vic McQueen character to please speak clearly. She whispered and mumbled through the whole thing and I could barely tell what was going on. Despite that I would like to see it return.

I’m loving NOS4A2! It definitely needs to be renewed for unlimited seasons! I’m hoping this season is a long one! Can’t wait to see next weeks episode…

I absolutely love this show!!!!

Really love the show!! Hope there are more seasons to come!!

I really like the show, the characters are outstanding, please don’t cancel the show !

A slow burn but I have bought the season and already watched unto Ep4. Gets better each episode and I really love Ashleigh Cummings’ Vic – she is an actress who you grow to love in most of her work. Cant wait to see her in The Goldfinch as the beautiful character Pippa.

Just watched S1/Ep1 of Nos4a2 and loved it so far. Now I can’t wait for Episode 2. Hope that they don’t start a great new show then cancel it. I hate when that happens.