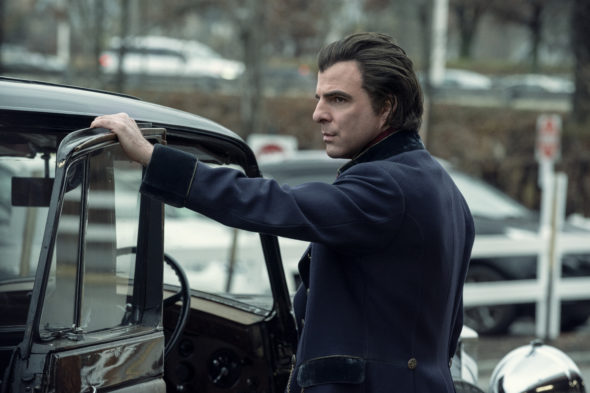 What has become of Victoria McQueen? Is the NOS4A2 TV show cancelled or renewed for a second season on AMC? The television vulture is watching all the latest cancellation and renewal news, so this page is the place to track the status of NOS4A2, season two. Bookmark it, or subscribe for the latest updates. Remember, the television vulture is watching your shows. Are you?

An AMC supernatural horror drama based on the Joe Hill novel, NOS4A2 stars Ashleigh Cummings, Zachary Quinto, Olafur Darri Olafsson, Virginia Kull, and Ebon Moss-Bacharach. From creator Jami O’Brien, the series centers on a young working-class woman named Victoria McQueen (Cummings). An artist, Vic develops the supernatural ability to find missing things. Soon, she is on the trail of the seemingly immortal Charlie Manx (Quinto) who sustains himself on the souls of children.

Will AMC cancel or renew NOS4A2 for season two? Early reviews weren’t great, but the television audience makes up its own mind and the ratings have been pretty good. Unless this is a one-and-done series, I think it will be renewed. I’ll keep a hungry eye on the ratings and update this page with and developments. Subscribe for free NOS4A2 cancellation or renewal alerts.

What do you think? Are you glad that AMC renewed the NOS4A2 TV show for a second season? How would you feel if AMC had cancelled this TV series, instead?

I too would like a season 3, I watch every week faithfully, or should I say with loyalty. I also believe you should listen to your viewers, we are the ones that make the ratings. Thanks for reading.

I believe there should be a season 3, this show is amazing and addicting. It can start with rebuilding christmas land but an orphanage for all the lost children. Millie manx escaped and without vic McQueen so we need to see how millie makes out, because she started to turn to static grabbed her ornament and ran with it because she can be mortal and not without it. Vic and lou and bruce get back home and bruce tells his mom he saw his dad craig in the wraith telling him charlie wasn’t a good man and that she would… Read more »

I’m super excited can’t wait!! I hope they keep going with it!!

I would have been so upset if the show was canceled. Love this show. It’s one where I don’t want to wait a whole week to see what happens!!

Glad a 2nd season will be, currently watching this and it’s gonna be my new show.

Would love there to be a second season. Have not finished the current as of yet but I am addicted.

They could’ve done a little better with the ending. I was a little disappointed, but the show was awesome and had me hooked from the beginning. I hope they renew the show and close the next season out better than they did this one. Any idea when they will renew it if at all?

I have not watched the season yet but have read the book. If there are a lot of ends to tie there better be a second season. The book ended beautiful with no ends to tie! Makes me hesitant to watch now incase ends don’t tie. If you have not read the book… do so… it’s excellent!

It is atmospheric and interesting, according to my opinion even better than the book, excellent actors. I would like to see second season.

just started watching the show sunday nite 7/6/19. Been wanting to know what the show was. had me intrigued. Binge watched eps 1 thru 4. Fascinating, Intriguing, well done, Zachery is excellent as Nosferatu. Love the supernatural aspect of the show. Has a different name from the original Count Orlok. (need to wreathe article agin.) Knowing he’s a vampire makes it even more interesting. Great Sci-Fi show. Do want AMC to continue with Season 2. It deserves it. Characters connect very well.

Absolutely LOVED AMC’s NOS4A2 ! The cast was excellent, story fabulous….There has to be a SEASON 2.
How could you NOT love this show !! Just GR8 entertainment….

I have not watched the season yet but have read the book. If there are a lot of ends to tie there better be a second season. The book ended beautiful with no ends to tie! Makes me hesitant to watch now incase ends don’t tie. If you have not read the book… do so… it’s excellent!

This is great. Love it. So hope it is renewed for a second season. Lots of ends to tie.

Although it was a bit slow, I feel the show has promise. All characters played their part beautifully. Here’s hoping for a renewal for a second season.