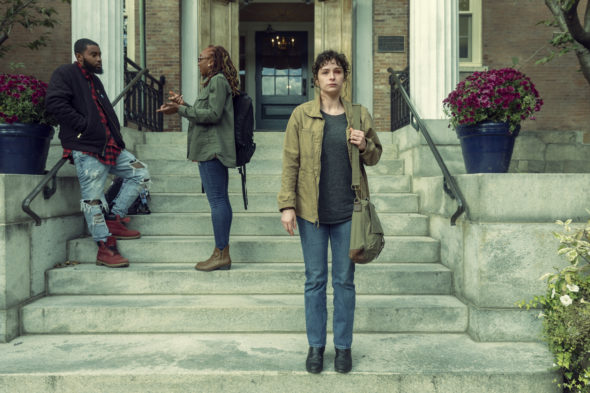 Does Vic stand a chance during the first season of the NOS4A2 TV show on AMC? As we all know, the Nielsen ratings typically play a big role in determining whether a TV show like NOS4A2 is cancelled or renewed for season two. Unfortunately, most of us do not live in Nielsen households. Because many viewers feel frustration when their viewing habits and opinions aren’t considered, we’d like to offer you the chance to rate all of the NOS4A2 season one episodes here. *Status update below.

An AMC supernatural horror drama based on the Joe Hill novel, NOS4A2 stars Ashleigh Cummings, Zachary Quinto, Olafur Darri Olafsson, Virginia Kull, and Ebon Moss-Bacharach. From creator Jami O’Brien, the series centers on a young working-class woman named Victoria McQueen (Cummings). An artist, Vic develops the supernatural ability to find missing things. Soon, she is on the trail of the seemingly immortal Charlie Manx (Quinto) who sustains himself on the souls of children.

What do you think? Which season one episodes of the NOS4A2 TV series do you rate as wonderful, terrible, or somewhere between? Should AMC cancel or renew NOS4A2 for a second season? Don’t forget to vote, and share your thoughts, below.

Great show, I was a huge fan of bates motel on a&e. I think this show is my replacement for what I lost when bates ended. I’m definitely hooked.

I look forward to watching NOS4A2 and, I’m so happy it’s coming back because every time there’s a descent show on tv it doesn’t last. The season finale was great and Cummings (Vic Mcqueen) should get an award for her acting, when her bf dies in the car, her reaction was on point and very believable!

I have looked forward to watching this every Sunday, already am looking forward to Season 2!Think I found my new favorite show!

I enjoy the originality of this intelligently written series and hope they will renew it. The cast is great and the story deserves a second season in which to develop.

This show deserves a renewal. The actors are so believable in their respective roles and the story
line never gets tired or boring. Well done, Season
One

Renew for season 2 this show was great

Yes please renew it. I was stuck in it from the very beginning. It’s refreshing to be different and a quirky twist to typical vampire shows

I want a second season absolutely. I am thoroughly hooked. However, I feel like AMC is not putting much effort into promoting NOS4A2. All AMC worries about is “Fear”, which has become total crap ever since Al arrived in her stupid tank