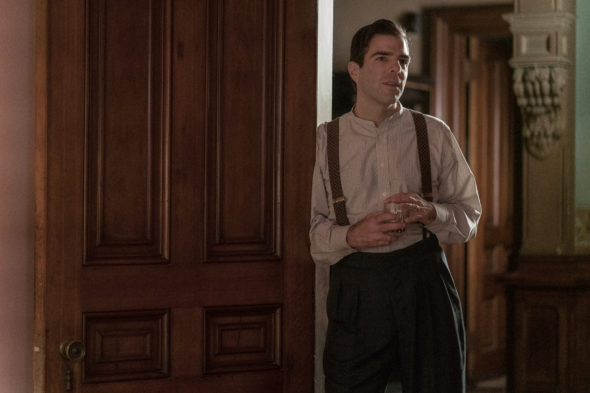 Can Vic save her son in the second season of the NOS4A2 TV show on AMC and BBC America? As we all know, the Nielsen ratings typically play a big role in determining whether a TV show like NOS4A2 is cancelled or renewed for season three. Unfortunately, most of us do not live in Nielsen households. Because many viewers feel frustration when their viewing habits and opinions aren’t considered, we invite you to rate all of the second season episodes of NOS4A2 here. *Status Update Below.

An AMC and BBC America supernatural horror drama that’s based on the Joe Hill novel, NOS4A2 stars Zachary Quinto, Ashleigh Cummings, Jahkara Smith, Olafur Darri Olafsson, Ebon Moss-Bachrach, Virginia Kull, Jonathan Langdon, Ashley Romans, Jason David, and Mattea Conforti. From creator Jami O’Brien, the series follows a seemingly immortal being who sustains himself on the souls of children. Season two takes place eight years later and Vic McQueen (Cummings) remains more determined than ever to destroy Charlie Manx (Quinto). Manx, having faced his own mortality, emerges desperate for revenge against Vic. He sets his sights on the person who means most to Vic – her eight-year-old son Wayne (David). The race for Wayne’s soul sends Vic and Charlie on a high-speed collision course, forcing both to confront the mistakes of their pasts in order to secure a hold on Wayne’s future.

What do you think? Which season two episodes of the NOS4A2 TV series do you rate as wonderful, terrible, or somewhere between? Do you think that NOS4A2 should be cancelled or renewed for a third season on AMC and BBC America? Don’t forget to vote, and share your thoughts, below.

Didn’t discover the show until the 2nd season but I’m really into it! It’s a mix of sci-fi and horror, like the actors and characters. Would really love to see the show continue and am looking forward to more seasons and seeing what happens next. Please renew!!

Not To Spoil So Far.However Me PersonallyBeing A Die Hard Nos4a2 Fan.I Am Really Looking Forward To The Final Charlie Manx/Vic McQueen Showdown In The Series Finale.Because I Am Also Very Much Anticipating The Spin-off Series Chronicling Maggie’s Adventures(Which Will More Than Likely Give More Backstory To Every Nos4a2 Character We’ve Grown To Love,With Many Returning)!