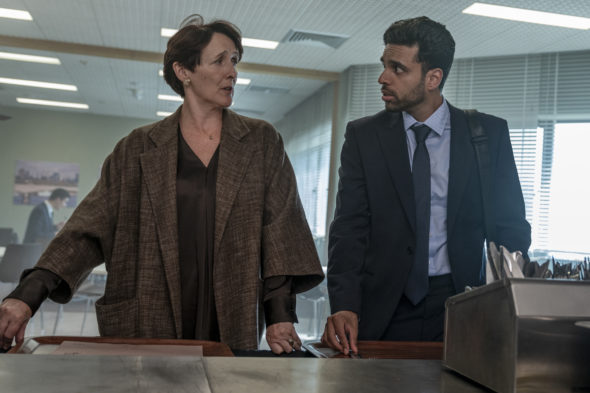 When will Villanelle and Eve collide in the third season of the Killing Eve TV show on BBC America and AMC? As we all know, the Nielsen ratings typically play a big role in determining whether a TV show like Killing Eve is cancelled or renewed for season four (in this case, it’s already been renewed). Unfortunately, most of us do not live in Nielsen households. Because many viewers feel frustration when their viewing habits and opinions aren’t considered, we invite you to rate all of the third season episodes of Killing Eve here.

A BBC America comedy-spy thriller series (which is simulcast on AMC), Killing Eve stars Sandra Oh, Jodie Comer, Fiona Shaw, Kim Bodnia, Sean Delaney, Owen McDonnell, Dame Harriet Walter, Danny Sapani, Gemma Whelan, Camille Cottin, Steve Pemberton, Raj Bajaj, Turlough Convery, Pedja Bjelac, and Evgenia Dodina. Season three continues the story of two women with brutal pasts, addicted to each other but now trying desperately to live their lives without their drug of choice. For Villanelle (Comer), the assassin without a job, Eve (Oh) is dead. For Eve, the ex-MI6 operative who’s hiding in plain sight, Villanelle will never find her. All seems fine until a shocking and personal death sets them on a collision course yet again. The journey back to each other will cost both of them friends, family, and allegiances… and perhaps a share of their souls.

What do you think? Which season three episodes of the Killing Eve TV series do you rate as wonderful, terrible, or somewhere between? Are you glad that Killing Eve has been renewed for a fourth season on BBC America? Don’t forget to vote, and share your thoughts, below.

Wet pleased Killing Eve has returned for a third season. Have only seen the first episode so far, but it looks very promising and up to the high standards of the previous two seasons. Looking forward to the rest of this season!