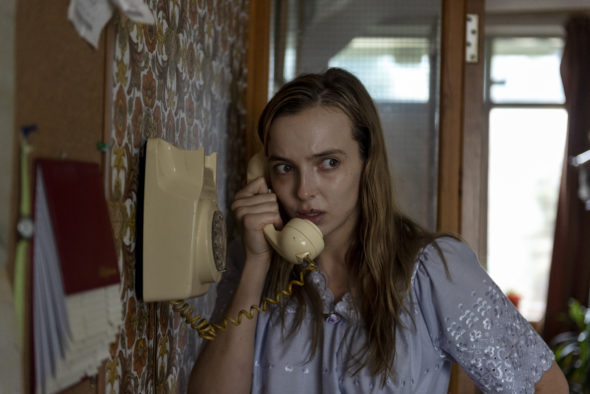 How long can Eve Polastri go on like this? Has the Killing Eve TV show been cancelled or renewed for a third season on BBC America? The television vulture is watching all the latest cancellation and renewal news, so this page is the place to track the status of Killing Eve, season three. Bookmark it, or subscribe for the latest updates. Remember, the television vulture is watching your shows. Are you?

A BBC America thriller, based on Luke Jennings’ Villanelle novel series, Killing Eve stars Sandra Oh, Jodie Comer, Fiona Shaw, Kirby Howell-Baptiste, Kim Bodnia, Sean Delaney, Owen McDonnell, Nina Sosanya, and Edward Bluemel. The story centers on MI6 security officer Eve Polastri (Oh) and capricious killer Villanelle (Comer), who become bound by a mutual act. The second season, which is simulcast on AMC, picks up where the first one left off, and Eve has to find Villanelle before someone else does.

On AMC, the second season of Killing Eve averaged a 0.14 rating in the 18-49 demographic and 627,000 viewers. Find out how Killing Eve stacks up against other BBC America and AMC TV shows.

Don’t spend time worrying that whether BBC America will cancel or renew Killing Eve for season three. The cable network already picked up the third season, the day after the season two debut. Since future installments will still depend on the show’s ratings, I’ll keep an eye on the Nielsens and update this page with breaking developments. Subscribe for free Killing Eve cancellation and renewal alerts.

What do you think? Do you think BBC America was right to renew its Killing Eve TV show, before the season one premiere? Should they cancel or renew this TV series beyond that?