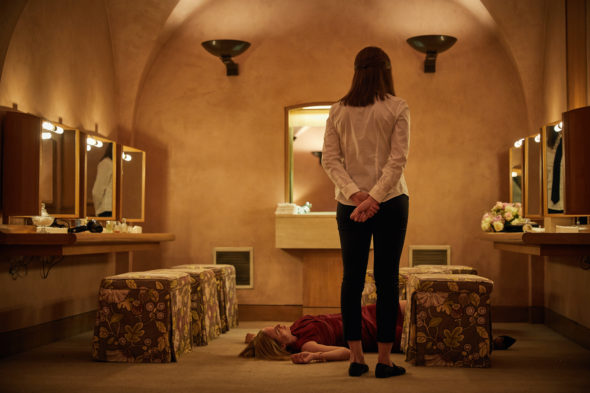 TV show description:
Based on the Villanelle series of novels from Luke Jennings, the Killing Eve TV show was developed for television by Phoebe Waller-Bridge, who writes and executive produces the TV series.

The crime thriller centers on MI5 security officer Eve Polastri (Oh) and Villanelle (Comer), a capricious yet capable killer. Essentially a desk jockey, Eve yearns for the more challenging life of a spy. Meanwhile, Villanelle (Comer) revels in the high life made possible by her brutal, illicit career as an assassin.

Most days, Eve spends her time assigning protection to foreign visitors of interest, for their trips to London. Still, she dreams of working as a top-secret spy hunter. Despite her degree in criminal psychology and a career in risk assessment, she has lived a rather safe, sheltered life.

When Eve gets bored, she gets lazy, and boy is she bored. Although she and her husband, Niko (McDonnell) have a good marriage, her dissatisfaction with her life is growing. She started tracking a new, female assassin on her own. What will she do, now that their paths have crossed?

Villanelle, meanwhile, couldn’t look more innocent. Beneath her benign facade though, lies the heart of a ruthless killer. A true psychopath, Villanelle isn’t troubled by anything so trifling as a conscience.

Remarkable in her own right, Villanelle has a flare for the whimsical. She never shies from pushing things to the limit with her handler, Konstantin (Bodnia), either.

Once upon a time, she had nothing of her own. Now though, this beauty appreciates the finer things in life, and she wants to hold onto them if only she can keep her own weaknesses from tripping her up.

As Eve closes in on Villanelle’s true identity, she starts taking more risks. Will she catch this predator, or end up as her prey? Ultimately, who is the cat and who is the mouse? Stay tuned.

Series Finale:
Episode #32 — Hello, Losers
Eve and Villanelle focus on making a seismic stab at The Twelve, risking their own lives; Carolyn arrives home as a traitor, she has a finite amount of time to use her intel as leverage to get herself back in the game.
First aired: April 10, 2022.

What do you think? Do you like the Killing Eve TV series? Should this BBC America TV show have ended or been renewed for a fifth season?

I can not believe we never got more than fifteen minutes of Villanelle and Eve together as a couple. At least they finally consummated the attraction physically (in the stolen camper van). Would have liked to see more happiness. We true fans got dealt the usual tease.

Love killing Eve!!! Dont end it!!! Cant wait until season 4 is out! Cromer and Ohe are fantastic

One of the best shows I have watched in a looooong time, please, do not cancel, awesome plot, unpredictable, superb acting, excelent!

Lovvvvvvee this show!!!! Keep it coming…..

I have anxiously been awaiting the next season of Killing Eve. Please continue the series!!

I really have enjoyed watching this series and have been anxiously waiting for the next season to start. Please continue with Killing Eve!!!

PLEASE DO NOT CANCEL Killing Eve. Its an awesome show… the humor in this really cracks me up. Was so looking forward to Season 2!!! Come on, KEEP KILLING EVE!!

Killing eve – technical writers must be a bunch of thickies. They seem clueless about the simplest practical things, completely out of touch with human behaviour and obviously think that Brutish secret services operatives are as dumb as they are.

Different, humorous, and unpredictable. Love it . Don’t cancel it.

The story line is ridiculous and completely implausible. The show makes MI5/MI6 the equivalent of the Keystone Cops – fumbling, bumbling their way to a lead and then still losing.

Villanelle makes very little effort to disguise her identity but yet she is ‘unknown’. LOL
In the age of CCTV cameras, video surveillance, mobile phone with camera/video and facial recognition software, we are supposed to suspend belief that she can’t be seen or found. Plus she leave fingerprints and DNA everywhere.

The show is fun if you are willing to just laugh along and not take it seriously.

This has to be renewed. You can’t just leave us hanging. This story is well written, well acted and makes you hold your breath & forget to breath at times. And some of the sexual humor & innuendo is so quiet yet makes me laugh out loud. Jodie Comer was perfect in every way for this part. And Sandra Oh is as always exceptional. Not sure where this would go next but it is a road I would love the opportunity to go down.

A well thought out and gripping program that has nail biting suspense , humor and a a strong story line. It definitely should be renewed.