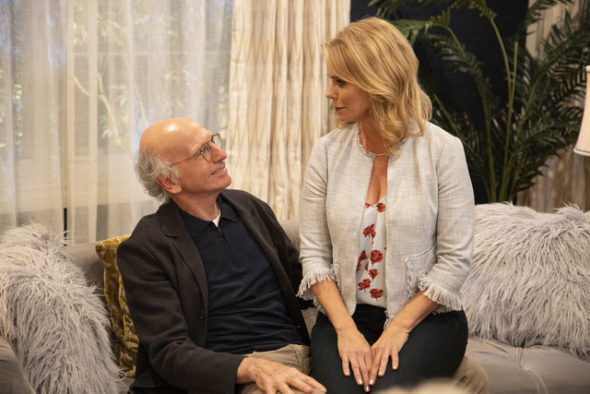 After more than 100 episodes, the world is still bugging Larry David. He’s confirmed that Curb Your Enthusiasm will return for a 12th season on HBO.

The 11th season of Curb Your Enthusiasm averaged a 0.09 rating in the 18-49 demographic and 441,000 viewers. Compared to season 10 (which aired in 2020), that’s down by 48% in the demo and down by 33% in viewership in the live+same day ratings (including DVR playback through 3:00 AM). Compared to the cable channel’s other series, it’s a middle-of-the-road performer.

Curb has long had an ongoing greenlight for new seasons from HBO — as long as David wants to make another season, the cable channel will take it. David has considered ending the show for years but always ends up coming back for more. The schedule has been irregular at best.  Over the past 21 years, there have been 11 seasons of the series, with a big gap between 2011 and 2017.

At an Emmys event at the DGA last night, an 11th season episode was shown and a live panel discussion followed. It was hosted by Rich Eisen and featured David, executive producer Jeff Schaffer, Garlin, Essman, Smoove, Hines, and Lewis. David was asked about the show’s future and he confirmed that Curb will indeed return for season 12. No further details were revealed.

So, I was honored to emcee an @TheEmmys panel for “Curb Your Enthusiasm” tonight here in LA with most of the cast and asked Larry David the ultimate question:

Will there be another season of Curb?

What do you think? Do you enjoy watching the Curb Your Enthusiasm TV show? Are you glad that it’s returning for a 12th season on HBO?

You really need to get rid of J.B.Smoove !!! The show was good until he was Larry David’s roommate. He is sooo foul mouthed, & unnecessary !!!
If I do watch the show, I zzzzzz through J.B…..

Yes, great show, glad it will be back and hope for 10-12 episodes

Good news hbo look forward to seeing it this year. Hopefully better comedy like last season was. Enjoy it and love it all episodes came back on.