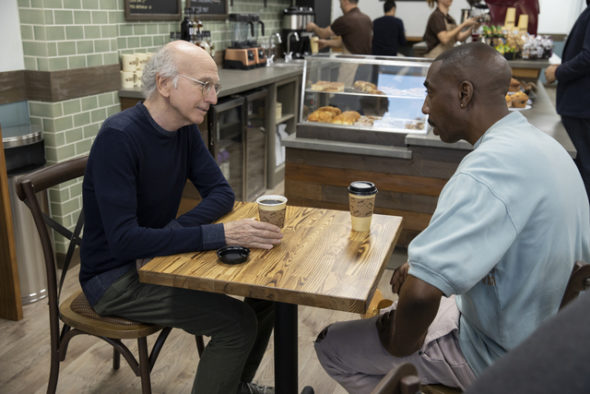 Has Larry run out of rants? Has the Curb Your Enthusiasm TV show been cancelled or renewed for a 12th season on HBO? The television vulture is watching all the latest cancellation and renewal news, so this page is the place to track the status of Curb Your Enthusiasm, season 12. Bookmark it, or subscribe for the latest updates. Remember, the television vulture is watching your shows. Are you?

Airing on the HBO cable channel, the Curb Your Enthusiasm TV show stars creator Larry David as an over-the-top version of himself. The cast also includes Susie Essman, Jeff Garlin, Cheryl Hines, J.B. Smoove, Ted Danson, and Richard Lewis. The series continues to prove how seemingly trivial details of one’s day-to-day life — a cold cup of coffee, a stained shirt, a missing toothbrush — can precipitate a catastrophic chain of events.

The 11th season of Curb Your Enthusiasm averaged a 0.09 rating in the 18-49 demographic and 441,000 viewers. Compared to season 10, that’s down by 48% in the demo and down by 34% in viewership in the live+same day ratings (including DVR playback through 3:00 AM). While these numbers don’t include further delayed or streaming viewing, they are a very good indicator of how a show is performing, especially when compared to others on the same channel. There can be other economic factors involved in a show’s fate, but typically the higher-rated series are renewed and the lower-rated ones are cancelled. Find out how Curb Your Enthusiasm stacks up against other HBO TV shows.

Will HBO cancel or renew Curb Your Enthusiasm for season 12? At this point, that seems like a moot point. As long as David wants to make another season, I’m sure HBO will take it. I’ll update this page with breaking developments. Subscribe for free alerts on Curb Your Enthusiasm cancellation or renewal news.

What do you think? Are you glad that the Curb Your Enthusiasm TV show has been renewed for a 12th season on HBO? How would you feel if this show had been cancelled this TV series, instead?

Love this show so funny look forward new season. Enjoy it and love it. Never missed any episodes of it. So good with Larry David is the best.