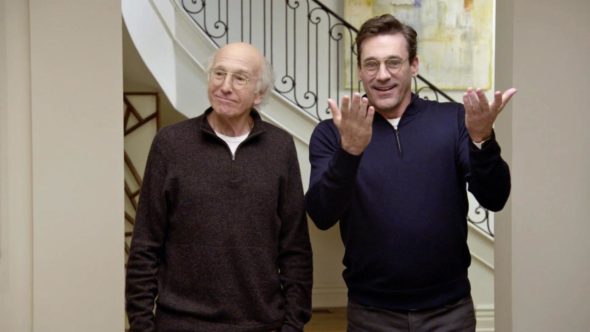 Is this the end for Larry? Has the Curb Your Enthusiasm TV show been cancelled or renewed for an 11th season on HBO? The television vulture is watching all the latest cancellation and renewal news, so this page is the place to track the status of Curb Your Enthusiasm, season 11. Bookmark it, or subscribe for the latest updates. Remember, the television vulture is watching your shows. Are you?

Airing on the HBO cable channel, Curb Your Enthusiasm is a semi-autobiographical comedy series and stars co-creator Larry David as a fictionalized version of himself. The cast also includes Susie Essman, Jeff Garlin, Cheryl Hines, Richard Lewis, and J.B. Smoove. Guests this season include Jeff Tweedy and Saverio Guerra. In the 10th season, Larry kicks off the new year with new rival Mocha Joe, gets roped into lunch plans, has a misunderstanding with a caterer, and gives Susie an extravagant gift.

7/1/20 update: Curb Your Enthusiasm has been renewed for an 11th season on HBO.

What do you think? Are you glad that the Curb Your Enthusiasm TV show has been renewed for an 11th season?

Coronavirus pandemic hit it might be awhile to come back on hbo series. Larry David rip up trump omg not good.

I hope Curb Your Enthusiasm will have a season 11.