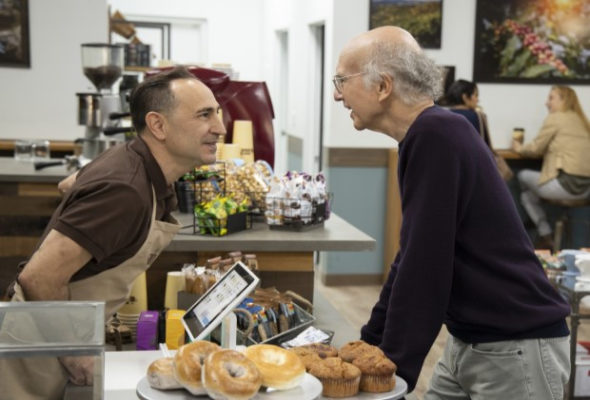 An HBO A semi-autobiographical comedy series, Curb Your Enthusiasm stars co-creator Larry David as a fictionalized version of himself. The cast also includes Susie Essman, Jeff Garlin, Cheryl Hines, Richard Lewis, and J.B. Smoove. Guests this season include Jeff Tweedy and Saverio Guerra. In the 10th season, Larry kicks off the new year with new rival Mocha Joe, gets roped into lunch plans, has a misunderstanding with a caterer, and gives Susie an extravagant gift.

*7/1/20 update: Curb Your Enthusiasm has been renewed for an 11th season on HBO.

Best comedy show on TV. Thanks the lord for Larry David He saved my sanity when i lost my husband
Cant wait for new series. I would have married him years ago if we’d met. He wouldn’t have escaped me. so many comedy series just not funny any more. i cant even think of one except for some really intelligent stand ups e.g. Ricky Gervais.

Season premiere of Season 10 proves that Larry, the rest of the regular cast, and even the supporting players still haven’t lost their touch. The writing is as fresh and funny as ever, and LD still has a gift for finding the hilarity in being as obnoxiously curmudgeonly as possible.

Larry has to resolve the situation between himself and Cheryl. Hoping they eventually get back together.

What a show! Nothing makes me laugh so much!! I love Curb Your Enthusiasm, I really hope it still goes on for years and years!

I agree …..i actually cancel things to stay in to watch it Best of the best