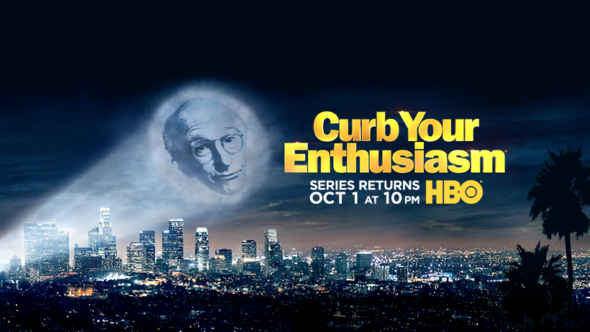 Larry David is finally back on HBO with a ninth season of his Curb Your Enthusiasm TV show. The comedy ran regularly for its first seven seasons between October of 2000 and November of 2009, then returned for an eighth season between July and September of 2011. The television landscape has changed considerably since its last season finale, never mind the series premiere. While fans responded enthusiastically to news of the return, will that translate into butts in chairs and eyes on screens? Will Curb Your Enthusiasm be cancelled or renewed for season 10? Stay tuned.

A semi-autobiographical, scripted HBO comedy, Curb Your Enthusiasm stars co-creator Larry David as a fictionalized version of himself. The cast also includes Jeff Garlin as Jeff, Susie Essman as Susie, J.B. Smoove as Leon, and Cheryl Hines as Cheryl, along with Richard Lewis, Bob Einstein, Ted Danson, and Mary Steenburgen.

For historical comparisons: During its previous season on HBO, way back in 2011, the eighth season of Curb Your Enthusiasm averaged a 0.92 rating in the 18-49 demographic and 1.99 million viewers.

What do you think? Do you still like the Curb Your Enthusiasm TV series? Should HBO cancel or renew it for season 10?

12/14 update: Curb Your Enthusiasm is renewed for season 10 on HBO. Details here.