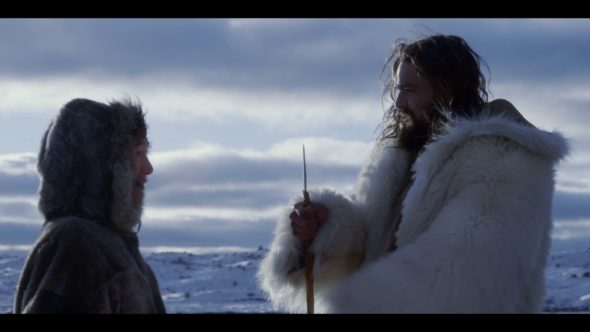 Following the snowy step Discovery Canada took back in September, Netflix has renewed the Frontier TV show for a third season. The second season just dropped to Netflix on November 24th.

You can watch Frontier at netflix.com/frontier, with a Netflix subscription.

What do you think? Are you a fan of the Frontier TV series? Did you think Netflix would cancel or renew it for season three? Let us know, below.

Fronteer was one my three favorite shows on Netflix, If Netflic cancels it this will be a big mistake

What is the exact date in 2018 that the show “Frontier” will air?

Looking forward to next Season. we have to have our Momoa Fix.

Love the show !! I hope they will renew this series . It keeps me wanting more for sure .

Absolutely love this series. Only signed up for Netflix to fill the gap of nothing else on but Olympics. Boy am I glad we did. Can’t wait for season 3. When does it start?

I love this series. The story is great. The scenes are breath taking. Grace and Sooknan are amazing characters. Can’t wait for Season 3! By the way- Jason Momoa is outstanding as Declan Harp!

Welcome change from other superfluous offerings numbing our intelligence.
Will follow on to newer frontiers…

Not sure but I’m glad they did. After the first season I could have lived without it but by the second Im thinking, what the heck? What happens next!