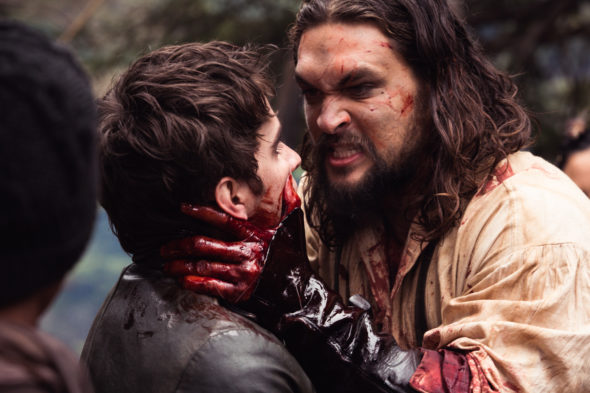 Frontier is returning for a second season, and a third season is already planned. Viewers wanting to know what is ahead on season two can check out the titles and episode descriptions released recently.

Spoiler Alert: Stop reading now if you do not want to know the details about the upcoming season.

With a price on Harp’s head, Fort James fills up with bounty hunters. Emberly and Chesterfield conspire against Benton for the good of the Fort. Michael and Sokanon struggle to keep the Black Wolf in business, as Grant and Carruthers compete for supremacy.

Bounty hunters find Harp in the North. Benton sails to England at the mercy of Everton, but makes a new friend. Michael has a plan to make the Black Wolf more money. Carruthers and Grant vie for the attention of a French Marquis, and Emberly finds herself in danger of losing her independence.

Sokanon and Michael are surprised by an unexpected reunion and Michael formulates a plan to steal from the HBC. Benton makes a few more friends in low places, and Chesterfield turns the screws on Emberly. Carruthers investigates sabotage at her factory as Grant prepares to ensnare the Marquis with newly minted Lady Clenna.

Harp travels to Montréal to do business with Elizabeth Carruthers. Michael and Sokanon arrive in Fort James to put in place their part of the plan, but Sokanon gets distracted. With Emberly gone, life has slipped from bad to worse at the alehouse.

Chesterfield reels from the theft of the pelts and searches for Harp. Michael meets with Pond and is faced with a hard choice when Sokanon arrives. Josephette and the Brown Brothers unite against Grant, and Harp must deal with enemies on all sides and make new alliances in the Season 2 finale.”

Are you excited for season two of Frontier? Tell us what you think.

When can I watch season 2 on Netflix. Loved season 1

Thrilled to see this show renewed. With all the crap on TV this a refreshing escape to a time and place I had little or no prior knowledge of.

I have been waiting for current info. I can hardly wait for the second season premier date. This is a great program not only from an entertainment perspective but the historical references are interesting as well.

It was ok, it never achieved ‘must watch’ status.