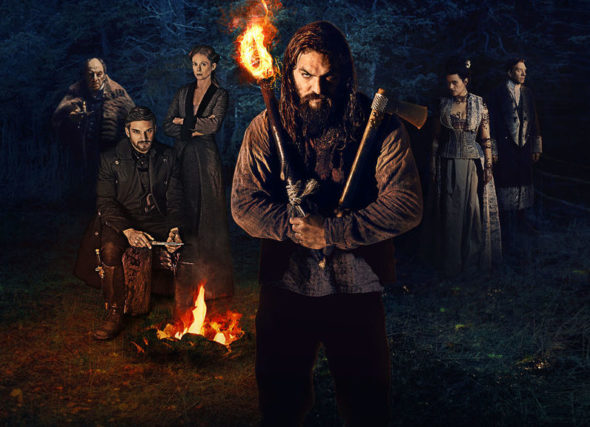 A part-Cree, part-Irish outlaw, Declan Harp (Momoa) is determined to break the Hudson Bay Company’s monopoly. His reputation as a brutal trader precedes him, and his Black Wolf Company has made major inroads in the fur trade — in record time. Now, his competitors are starting to feel the heat.

While his intentions are anyone’s guess, at the root of Declan’s success lies his keen ability to negotiate agreements between parties sorely at odds with one another. One thing is for sure, he is out for vengeance against Lord Benton (Armstrong) for some past misdeed, and is bound and determined to break the stranglehold the Hudson Bay Company (HBC) has on the industry.

Bloodthirsty Benton parlayed his military experience into lucrative career as an HBC officer. From a privileged background, he maintains his upper-class lifestyle even on the Frontier, where those under his control lead wretched existences.

When HBC’s profits take a hit, the executives lean on Benton to destroy the competition. Seeing Declan as a traitor, Benton decides he is the biggest threat to his good life and employs Michael Smyth (Liboiron), to crush him.

A young Irishman, Smyth ended up in the New World, after accidentally stowing away on a ship. In exchange for his life, and the freedom of his beloved Clenna (Porter-Follows), Michael agrees to become a spy.

Positioning himself between ruthless men such as Harp and Benton requires a deft touch. Fortunately, beneath his innocent facade lies a strong-willed spirit. Provided he can adapt and survive, Michael knows there is wealth and power to be had.

An expert warrior, hunter, and tracker, Sokanon (Matten) is one of Declan’s closest confidantes. Today, it is the loss and pain of her past that drives her to get satisfaction from the English. While her issues are tied up in his history with Benton, Sokanon realizes she and Harp have essential differences in opinions and goals, which shakes her dedication to him and to the Black Wolf Company.

The story is told from multiple points of view. Unfolding on the untamed North American Frontier, the drama is set in a place and time where business deals are sometimes solved by violence, and tensions are high between Native American tribes and Europeans settlers.

What do you think? Do you like the Frontier TV series? Should this TV show have been cancelled or renewed for a fourth season on Netflix?

Hey Netflix, the series stopped a weird place, and situations that need closure, or 5 million fans should write in end stories by snail mail, to give your writers some possible material.
Yes, Frontier needs another season to the up all the loose ends.

I want this show to continue for a fourth season just to complete the storylines that have been left dangling. I want to know if Declan finds his son and what happens to Michael and his allies. Did they defeat the Hudson Bay company and is douglas brown alive? What happens to grace and is Chesterfield really dead? Does Michael marry the Indian woman?

I only discovered this incredible historical adventure last week and watched all episodes ending tonight. THIS SHOW DEMANDS A 4TH SEASON. Clearly, that’s what the writers had in mind with the cliff they left viewers hanging on at the end of season 3! I was horrified to find no season 4 when, immediately at the end of the last episode, I checked for the next season, and found none!! Disappointment is not a deep enough word to express my feelings. Please wrap up all those tasty loose ends and complete the series with a season 4. FRONTIER is one of… Read more »

Frontier was a fantastic show , Something different loved it all the actors were amazing I recommend it all my friends

I’m very sad to learn that this show has been cancelled. It’s a shame. I hope that Netflix will change this decision and bring it back. Great Canadian history series are few and far between.