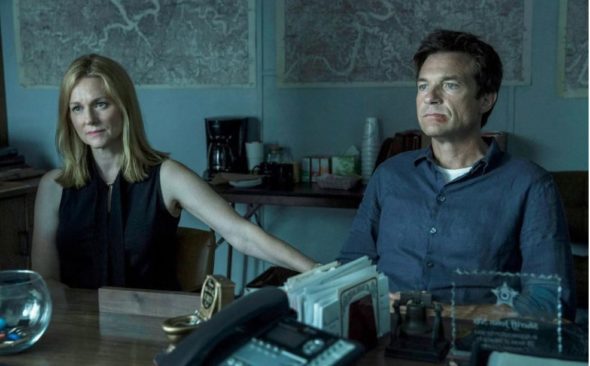 The Byrdes will be back at it one last time. Netflix has announced that they’ve ordered a fourth and final season of the Ozark TV show. The final season will be comprised of 14 episodes which will be broken up into two groups.

Netflix does not typically release ratings but Ozark has been a critical and audience hit since it debuted in 2017. So far, the drama has garnered 14 Primetime Emmy nominations and two wins for Jason Bateman as director and Julia Garner as supporting actress.

Here’s the renewal and final season announcement from Netflix:

They're going to go out with a bang.

Ozark will be back with an expanded 14-episode final season. pic.twitter.com/otIoUeTXyH

What do you think? Do you watch Ozark? Will you watch the fourth and final season?

Yes! Oz ark is a sit on the edge of your seat show. I will miss it!

Such a great show! My husband and I love it!

Love it. Can’t wait for the final series.

Waiting for the last season. When will that be?

I really liked the show and was happy and looking forward to another season. Finding something to watch on Netflix is difficult enough. Like a show get involved then bang canceled. About to cancel Netflix becoming waste of money. Boring

Have been WAITING for last season, when is it coming on????
.

I’m soooo excited Ozark is returning for a fourth season, but sad it will be the final one. I feel this show could go on for several more, as it is that good! Hope the return is sooner than later, but understand ‘ Coronavirus’ will determine when they can begin filming again. Just knowing it’s a definite go for a 4th, is all I need to know! YES!!

I love Ozark. Why are they being cancelled???? That sucks!