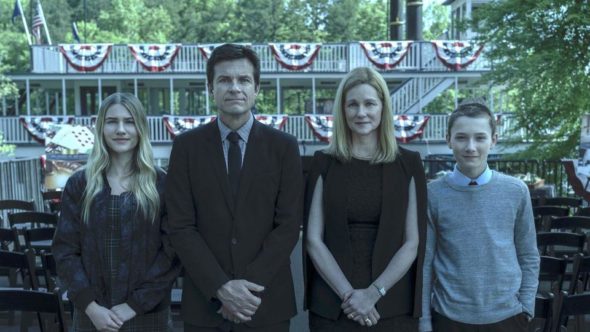 Can the Byrdes keep their family safe while managing their empire? Has the Ozark TV show been cancelled or renewed for a fourth season on Netflix? The television vulture is watching all the latest cancellation and renewal news, so this page is the place to track the status of Ozark, season four. Bookmark it, or subscribe for the latest updates. Remember, the television vulture is watching your shows. Are you?

Streaming on the Netflix subscription service, Ozark stars Jason Bateman, Laura Linney, Sofia Hublitz, Skylar Gaertner, Julia Garner, Lisa Emery, Janet McTeer, Tom Pelphrey, and Jessica Francis Dukes. The story centers on Marty Byrde (Bateman), a Chicago financial advisor who, along with his family, becomes entangled with a dangerous drug cartel. In season three, the Byrdes are back in business and the stakes have never been higher. As tensions mount surrounding their new casino, The Missouri Belle, Marty, and Wendy (Linney) struggle to balance their family’s safety with the growing success of their money-laundering empire.

Unless they decide to publicize viewership, it is difficult to predict whether Netflix will cancel or renew Ozark for season four. Generally speaking, Netflix TV shows which are going to be renewed are usually picked up within a month or so of the series or season premiere. Given the cast and reviews, I suspect Ozark will be renewed, as long as the cast and creators want to keep the show going. I’ll keep my ears open and an eye out for news, and will update this page with breaking developments. Subscribe for free alerts on Ozark cancellation or renewal news.

7/1/20 update: Ozark has been renewed for a fourth and final season on Netflix.

What do you think? Are you glad that the Ozark TV show has been renewed for a fourth season? Are you sorry that there won’t be a fifth season on Netflix?

I have been waiting all Summer for Season 5 of The Ozark to come back to Netflix. Why would you cancel it? Please bring it back. There are a lot of people waiting for Season 5.

I love the show please do not cancel this great show ,keep it going

PLEASEEEEEE BRING BACK OZARK!!!! Just binge watched all 3 seasons and l am now a huge fan!!! Will watch as many seasons as they can make. Great show, excellent cast and alot of episodes left me with my mouth open…especially the last episode of season 3. Hope they can resume safely after this pandemic is under control or over.

RENEW Ozark. What an addictive and great show. And not to mention, great cast.

This is one of the best shows I have seen in a long time. I hope this show is renewed. I would be severely bummed. Almost as bad as when the series Lillyhammer was discontinued.

I almost cancelled my subscription when some NETFLIX genius cancelled LILLYHAMMER…if OZARK (which would be even a bigger travesty, considering the jaw dropping cliff hanger season 3 ended on) is axed, then I will HACK Netflix out of my life.
Hey Netflix…SMARTEN UP!

Season 3 left me wondering if I would even watch a 4th season. I don’t know if a 4th season could turn the series around. The whole plot with Mya, the brother and the black male FBI agent, Zeke – it’s all too forced. The third season ruined this story line as far as I am concerned. Also, Wyatt & Darlene – WTF.

I just finished watching the entire 3 seasons and am now in Ozarks fever to see season 4. It’s addicting and the best series on Netflix. Please renew…i would watch it every night…

Please RENEW! That finale was crazy! We need more of this series to see what happens next. Theres so much more to the Byrds story and those other crazy characters. BRING BACK OZARK!!

I would probably CANCEL Netflix if they even THINK about canceling this TV series, Ozark. It is probably one of the VERY best TV series EVER! It definitely ranks up there with: Breaking Bad, House of Cards, Animal Kingdom, The Walking Dead, Better Call Saul. Even The Walking Dead can’t hold a candle to Ozark! There are a lot of lousy episodes of TWD, and its sequel, Fear The Walking dead. (But a lot of good episodes too). However, Ozark is much like House of Cards, in that each and every episode is EXCELLENT! What are they thinking? Please renew… Read more »

YES! PLEASE RENEW. THIS IS ONE OF OUR FAVORITE TV SHOWS!