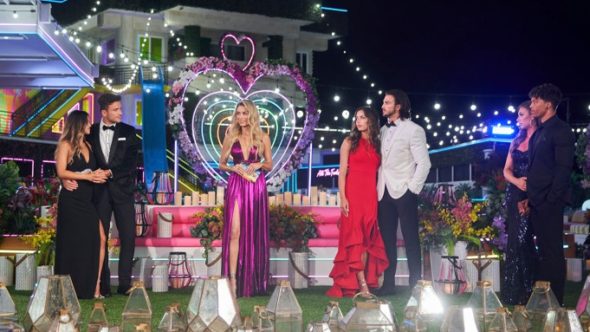 Two new groups of “Islanders” will be getting chances to win money and find love. The American version of the Love Island TV series has been renewed for two more cycles — seasons four and five. However, the TV show is moving from CBS to the Peacock streaming service. Season four will stream this summer.

A reality competition series, Love Island is based on the British show of the same name and is hosted by Arielle Vandenberg and narrated by Matthew Hoffman. The matchmaking begins as a group of single “Islanders” come together in a stunning Hawaiian Island villa, ready to embark on a summer of dating, romance, and ultimately, relationships. Games and challenges test and strengthen the couples’ relationships. Every few days the Islanders pair up and those who are not coupled are at risk of being dumped from the island. Islanders are on the lookout for romance, but the road to love doesn’t always run smoothly. Challenges abound with intriguing new Islander arrivals and dramatic twists as friendships and relationships form. In addition to choosing their partners wisely, Islanders must also win the hearts of viewers who have the opportunity to shape events on screen and ultimately crown one lucky couple the winner who will then have the chance to walk away with both love and the cash prize.

Airing on CBS on multiple nights last summer, the third season of Love Island averaged a 0.37 rating in the 18-49 demographic and 1,65 million viewers in the live+same day ratings (includes all DVR playback through 3:00 AM). Compared to season two, that’s down by 10% in the demo and down by 9% in viewership.

While the series doesn’t have impressive traditional ratings, Love Island is said to perform very well in delayed and streaming viewing. THR reports that CBS wanted to renew the series for a fourth season but wanted to scale back the number of hours. Producer ITV wasn’t interested in cutting back and took Love Island to other interested outlets. Peacock was the highest bidder. It’s unclear how many episodes will be produced but the streamer plans to release more than 80 hours of content across seasons four and five.

· LOVE ISLAND is an unscripted reality romance and competition series where glamorous singles are on a search for love while living together in a beautiful villa.

· “As we continue to make Peacock a destination for must-watch original programming, partnering with a global powerhouse like ITV enables us to build on their internationally beloved formats to attract all new fans to the platform,” said Susan Rovner, Chairman Entertainment Content, NBCUniversal Television and Streaming.

· Added Jenny Groom, EVP Entertainment Unscripted Content, “‘Love Island’ is a highly addictive dating format that is primed for a streaming service like Peacock where we can push boundaries and bring viewers steamy and dramatic twists. The series took pop culture by storm after the UK format found fans across the world, and we are thrilled to be able to bring an all-new version to Peacock this summer anchoring our unscripted slate.”

· “This really is an unprecedented deal for an unscripted brand,” said ITV America CEO David George. “Peacock and NBCU are the perfect home for Love Island because of their strategy to grow the show, utilizing the greater NBCU television portfolio and other platforms to help propel the series. That dedication, coupled with a two-season commitment on Peacock, sealed the deal. We’re incredibly excited to elevate the show through a bold new collaboration.”

· The new season will be hotter than ever as the Islanders couple up in a sexy new villa and compete in naughtier games and steamier challenges, with shocking twists and turns along the way. While in the villa, temptations rise and the Islanders must decide if they want to remain with their current partner or “recouple” with someone new. Throughout the season, those who are not coupled up will be at risk of leaving the villa. Viewers watching at home will also have a chance to weigh in on who stays and who goes home.

· Cast, schedule and location details will be announced at a later date.

· LOVE ISLAND is produced by ITV Entertainment, an ITV America company. The series is based on a format owned by ITV Studios and Motion Content Group, and distributed by ITV Studios.

Check out our CBS status sheet to track the Tiffany network’s new series pickups, renewals, and cancellations. You can find lists of cancelled shows here.
What do you think? Do you enjoy watching the Love Island TV series? Are you glad to hear that this show’s been renewed for seasons four and five? Will you be watching on Peacock?

I’m very upset about Love Island not being on Channel 2 and going to Peacock. I pay a lot of money for Spectrum and can’t afford to stream. Is there a chance it will come back on channel 2, otherwise I won’t be able to watch it. Thank you.

More of this utter garbage television that no on actually needs. I’m all for a bit of escape from humanities predicaments, but folks, read a book or a news paper, times pent on this S88t is time spent on nothing. Who keeps funding this trash, I wish it could just disappear entirely.

They start back up feb 27th