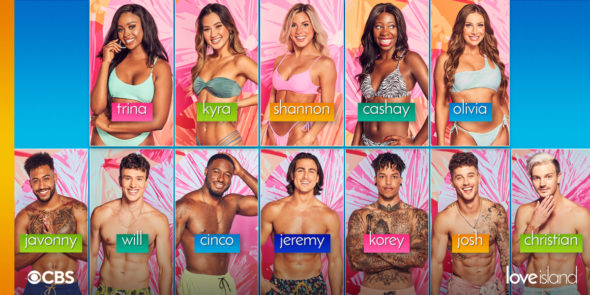 Who will find both love and money in the third season of the Love Island TV show on CBS? As we all know, the Nielsen ratings typically play a big role in determining whether a series like Love Island is cancelled or renewed for season four. Unfortunately, most of us do not live in Nielsen households. Because many viewers feel frustrated when their viewing habits and opinions aren’t considered, we invite you to rate all of the third season episodes of Love Island here.  *Status Update Below.

A CBS reality series, Love Island is based on the British show of the same name. The matchmaking begins as a group of single “Islanders” come together in a stunning Hawaiian Island villa, ready to embark on a summer of dating, romance, and ultimately, relationships. The ultimate temptation, Casa Amor, returns as well as new games and challenges that test and strengthen the couples’ relationships. Every few days the Islanders pair up and those who are not coupled are at risk of being dumped from the island. Islanders are on the lookout for romance, but the road to love doesn’t always run smoothly. Challenges abound with intriguing new Islander arrivals and dramatic twists as friendships and relationships form. In addition to choosing their partners wisely, Islanders must also win the hearts of viewers who have the opportunity to shape events on screen and ultimately crown one lucky couple the winner who will then have the chance to walk away with both love and the cash prize. Host Arielle Vandenberg and narrator Matthew Hoffman return. Contestants include Olivia Kaiser (28), Kyra Lizama (23), Trina Njoroge (24), Cashay Proudfoot (25), Shannon St. Claire (24), Korey Gandy (28), Josh Goldstein (24), Jeremy Hershberg (27), Melvin “Cinco” Holland, Jr. (25), Christian Longnecker (24), Will Moncada (26), and Javonny Vega (26).

What do you think? Which season three episodes of the Love Island TV series do you rate as wonderful, terrible, or somewhere between? Do you think that Love Island should be cancelled or renewed for a fourth season on CBS? Don’t forget to vote, and share your thoughts, below.

*2/25/2022 update: Love Island has been renewed for seasons four and five but is moving to Peacock.

This is pure trash and it’s on prime time. TAKE IT OFF THE AIR!

Omg!! No no no!!! These sort of shows have to stop!! There’s nothing decent on tv shows but mainly reality shows! It’s pathetic!

WOW OLD LUST ISLAND !!!!!!!!!!!! PLEASE find a show where everyday people are in the show ??? This show is for the HUNKS MALES AND FEMALES that are hand picked to play house on a Resort for people to day dream they were so lucky to look like one of them so why not make a show with average everyday men and women doing the same thing you might get a better show and more people might watch it ???? This LUST ISLAND is for the players getting the money you pay them to chase hunks around on a resort… Read more »