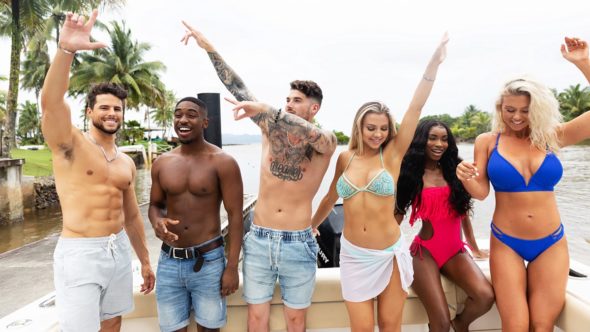 Despite some less-than-impressive same day ratings, CBS has renewed the Love Island summer series for a second season.

The first season of Love Island, which runs five nights a week, is averaging a 0.47 rating in the 18-49 demographic and 2.20 million viewers.

CBS Entertainment president recently addressed the show’s low ratings and noted that Love Island is one of the network’s strongest shows in streaming and has attracted a lot of young female viewers that don’t typically watch CBS programming.

Here’s the CBS press release about the second season renewal:

Landlocked Americans will be able to get back to the island in 2020 when the U.S. version of the international reality sensation LOVE ISLAND returns next summer. The romantic reality competition series is produced by ITV Entertainment, an ITV America company. Kelly Kahl, President, CBS Entertainment, and Thom Sherman, Senior Executive Vice President, Programming, CBS Entertainment, made the announcement at CBS’ portion of the Television Critics Association press tour.

LOVE ISLAND has expanded CBS’ summer audience, reaching a much younger and more female demographic. At the same time, the series has made a big digital impact as the Network’s most-streamed new show on CBS All Access and CBS.com in over a year, and as a continually trending social media topic following each night’s broadcast.

“The passion of LOVE ISLAND’s audience is incredible,” said Kahl. “The intensity of their social media engagement has created tremendous enthusiasm for the series here at the Network. We love the show’s creative execution and can’t wait for next season.” Added Sherman, “After its first season, the U.K. version exploded via word of mouth and social media to become a huge hit, and its viewership has grown every year. We believe first season U.S. fans are just as passionate and engaged and we look forward to building on that foundation with another fun season next summer.”

LOVE ISLAND features a group of single “Islanders” who come together in a stunning tropical villa, ready to embark on a summer of love, friendships and, ultimately, relationships. Every few days the Islanders must couple-up – those who fail to find a partner to couple up with risk being dumped from the island. Islanders are on the lookout for romance, but the road to love doesn’t always run smoothly. Challenges abound with new Islander arrivals and dramatic twists as friendships and relationships form. In addition to choosing their partners wisely, Islanders must also win the hearts of viewers who have the opportunity to shape events on screen and ultimately crown one lucky couple the winner, who will then have the chance to walk away with both love and the cash prize.

What do you think? Have you been watching the Love Island TV show on CBS? Did you think that it would be cancelled or renewed for a second season?

I think it’s a horrible and boring show. I want to throw up! OMG! SMH! You guys cancelled good shows for this!? Wow!

No, I didn’t watch. Although I usually watch those types of reality shows, five nights a week for several weeks is too much time to invest. If it had been on once a week, I would have watched.

So very happy Love Island was renewed. I really am loving that show. Thank you CBS!!