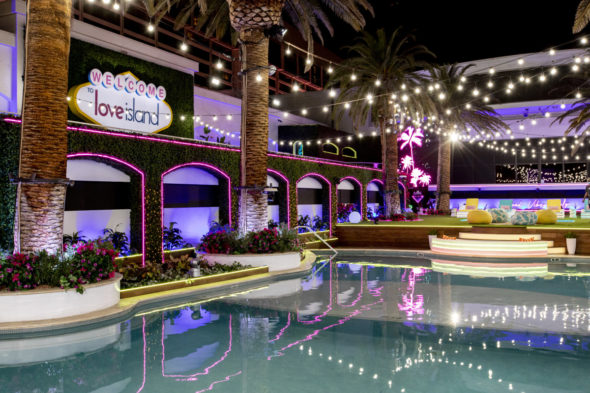 Who would you bet will win?  Has the Love Island TV show been cancelled or renewed for a third season on CBS? The television vulture is watching all the latest cancellation and renewal news, so this page is the place to track the status of Love Island, season three. Bookmark it, or subscribe for the latest updates. Remember, the television vulture is watching your shows. Are you?

Airing on the CBS television network, Love Island is based on the British show of the same name. Arielle Vandenberg hosts the matchmaking competition program which, in its second season, unfolds in a stunning villa in Las Vegas. Single “Islanders” meet and romance each other, hoping to form a relationship. “Islanders” who don’t manage to become part of a couple are at risk for elimination. From time to time, the show introduces new people into the mix to shake things up. The two contestants who are still part of a couple at the season’s end win the game and the chance to leave with both love and a cash prize.

The second season of Love Island averaged a 0.41 rating in the 18-49 demographic and 1.82 million viewers. Compared to season one, that’s down by 12% in the demo and down by 17% in viewership. Find out how Love Island stacks up against other CBS TV shows.

Will CBS cancel or renew Love Island for season three? The ratings were quite low last season but CBS supposedly renewed it because it did well attracting younger viewers to watch via streaming. The numbers are low once again but, I suspect that it will be renewed. I’ll update this page with breaking developments. Subscribe for free alerts on Love Island cancellation or renewal news.

1/28/21 update: Love Island has been renewed for a third season on CBS.

What do you think? Are you glad that the Love Island TV show has been renewed for a third season? How would you feel if CBS had cancelled this TV series, instead?

I not sure it counts as an dating show. 12 couples start off and the first season winner get put on amazing race due to being the only couple to last a year. And split up during lockdown after a year and a half. And season 2 doing even worst due to the last couples split 6 months later. I feel like it should be like baggage and offer the contests Free online dating.

Pure below-the-belt trash. As classy as a soup sandwich….

I think it definitely should NEVER have been on television. Isn’t there enough trash like this going on in the world CBS without you adding to the smut pile? So disgusted!