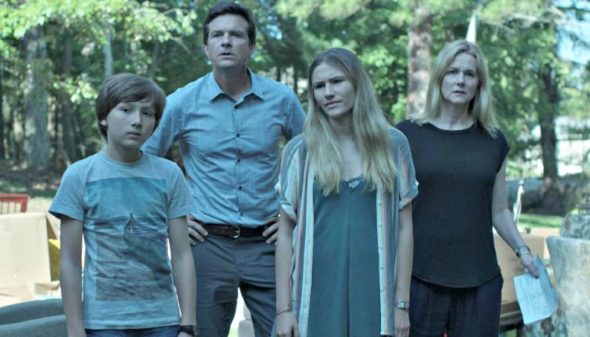 What’s next for Ozark? Recently, star Jason Bateman spoke with The Hollywood Reporter about season two of the Netflix TV show.

The drama stars Jason Bateman as a Chicago financial advisor who has been quietly laundering money for a drug kingpin, must quickly uproot his family and move the operation to The Ozarks, after his partner is caught cheating the business. The cast also includes Laura Linney, Sofia Hublitz, Skylar Gaertner, Julia Garner, Jordana Spiro, Jason Butler Harner, Esai Morales, Peter Mullan and Lisa Emery.

In the interview, Bateman revealed season two of Ozark will up the stakes:

Marty and Wendy [played by Laura Linney] now have $50 million they have to deal with, which escalates the stakes and jeopardy. There’s this business relationship with [local crime family] the Snells to help facilitate that larger washing of money and the possibility of having that go through a casino. And the relationship domestically between Marty and Wendy is still really fractured, and we’ll see if this business partnership they’re forced into is going to help that relationship or push it further apart. It will do a little bit of both. What’s fun about playing Marty and most parts that I’m attracted to is that he is us. He’s somebody that’s kind of familiar to you, hopefully. So that when he’s in a challenging situation, he’s a bit of a proxy for the audience.”

Netflix has not yet announced a premiere date for season two.

It is the one of the very best series out there right now.

Waiting impatiently for Season 2. This is a great series,

I love this show! Joined NetFlix to watch and not disappointed. Can’t wait for season 2!

Yes I will definitely will be watching series 2 of Ozark. I loved the quality of the production, writing, directors and acting by the lead actors. It has to get a second season.

Love the show! Please add more seasons. It is a well written show with actors who portray their characters really well.

This is one of the best series I have ever seen!!! There are a bunch of us waiting for Season 2!! I hope this happens along with a season 3 or more!!

This is one addicting series, one of the best I’ve seen, period. Jason Bateman’s performance is riveting. Highly recommended.

Loved it, too
Laura Kinney has always been a favorite – but Jason Bateman is quite a pleasant surprise