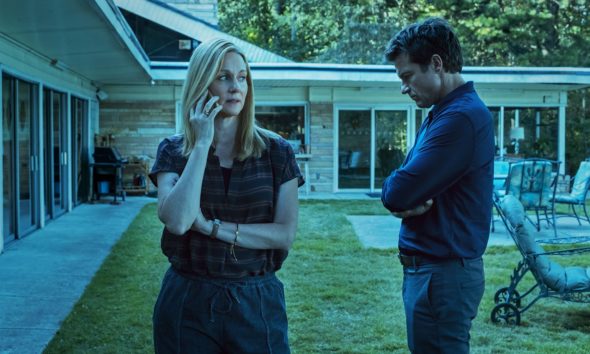 Do all of the Byrdes survive the third season of the Ozark TV show on Netflix? As we all know, the Nielsen ratings typically play a big role in determining whether a TV show like Ozark is cancelled or renewed for season four. Netflix and other streaming platforms, however, collect their own data. If you’ve been watching this TV series, we’d love to know how you feel about the third season episodes of Ozark here. *Status update below.

A Netflix crime thriller series, Ozark stars Jason Bateman, Laura Linney, Sofia Hublitz, Skylar Gaertner, Julia Garner, Lisa Emery, Janet McTeer, Tom Pelphrey, and Jessica Francis Dukes. The story centers on Marty Byrde (Bateman), a Chicago financial advisor who, along with his family, becomes entangled with a dangerous drug cartel. In season three, the Byrdes are back in business and the stakes have never been higher. As tensions mount surrounding their new casino, The Missouri Belle, Marty, and Wendy (Linney) struggle to balance their family’s safety with the growing success of their money-laundering empire.

What do you think? Which season three episodes of the Ozark TV series do you rate as wonderful, terrible, or somewhere between? Do you think that Ozark on Netflix should be cancelled or renewed for a fourth season? Don’t forget to vote, and share your thoughts, below.

*7/1/20 update: Ozark has been renewed for a fourth and final season by Netflix.

Omg, we’re so HOOKED on this series! I have so many friends and work associates now watching the series too. First season was a little slow for us as it was so dark and down. Then we got hooked and it was our prime entertainment thru the lockdown.
Just finished season 3 tonight and yearning for MORE!!!!
Please continue on! Absolutely love the characters and casting!! All incredible!
I miss Buddy!!!

Just finished season 3 and if doesn’t come back for season 4 I will be crushes!! You can’t just leave it like that!

Ozark is sooo good! Jason is just beautiful in acting!! The rest of the cast is just awsome to! I think you should carry on for at least 3 more seasons!!

I am hooked! This is the best series! Acting is fantastic and the storyline keeps you on the edge of your seat!

I’ve been watching from the beginning and was hooked immediately. Season 3 had been a roller coaster ride of how are they going to keep going. Awaiting season 4. Dont stop now.

I think Ozark is definitely one of the best series that you can watch on Netflix. I think that because almost every episode that I watched of it made me become anxious about what is going to happen. The characters are very complicated and their stories are made to perfection. I would love to watch a season 4 of Ozark and think it is a underrated series.

Absolutely blown away by Tom Pelphrey as Ben. Phenomenal performance and I see why they made him the showcase of Season Three. Yes on a season four. I can’t see how they could not continue. Emmy worthy performances by all but especially Tom Pelphrey.

I love that Tommy from power has joined the show! Please have a ssn 4 Jason Bateman rules!