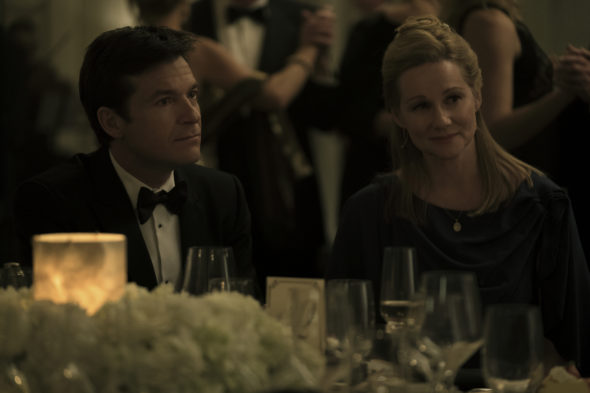 Netflix will continue to feather the Byrdes nest. The streaming service has renewed its Ozark TV show for a third season of 10 episodes. The renewal comes fairly quickly, as the second season just dropped on August 31st of this year.


I'm happy for me, but concerned for Marty – it's official OZARK 3 is on its way. pic.twitter.com/xeGXZxfrjB

Netflix’s acclaimed drama series Ozark has been renewed for a third season and will consist of 10 episodes.

In its much-anticipated second season, Ozark continues to follow Marty Byrde and his family as they navigate the murky waters of life within a dangerous drug cartel. With Del out, the crime syndicate sends their ruthless attorney Helen Pierce to town to shake things up just as The Byrdes are finally settling in. Marty and Wendy struggle to balance their family interests amid the escalating dangers presented by their partnerships with the power-hungry Snells, the cartel and their new deputy, Ruth Langmore, whose father Cade has been released from prison. The stakes are even higher than before and The Byrdes soon realize they have to go all in before they can get out.

What do you think? Have you enjoyed the first two seasons? Do you plan to watch season three of the Ozark TV series on Netflix?

My husband and I love this show and are excited for the 3rd season. Hopefully there will be many more to come.

This past weekend my husband and I watched season 1 & 2. Sooo excited about season 3!

When is season 3 starting

Intelligently-dramatically acted well performed for viewers like myself & wifey.

I’ve been waiting for what seems like forever for ANY information on when or if Ozark is gonna release another season! I absolutely loved the first two seasons but I haven’t seen or heard anything about a season 3! C’mon guys! Give us something to go on!!

Julie B
Reply to  Beth

Seriously Netflix, do you even care about your viewers? You could at least give us an idea of when season 3 is starting! It’s crappy to keep us hanging on if it’s not gonna happen!

Jeannine Franco
Reply to  Julie B