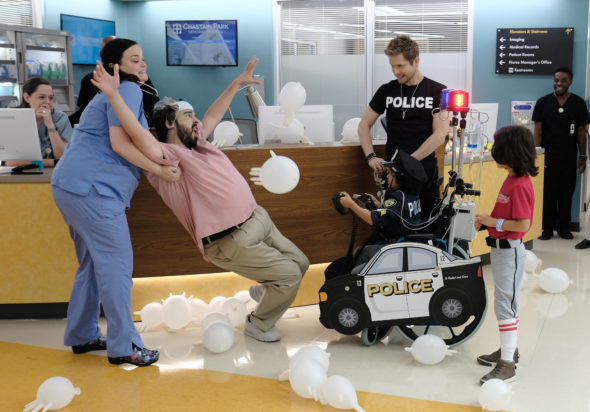 The Resident: A Look at the Ratings

The second season of The Resident on FOX is averaging a 1.04 rating in the 18-49 demographic and 4.89 million viewers. Find out how The Resident stacks up against the other FOX TV shows.

Next All-New Episode Airs Next Monday, October 15, on FOX

FOX has ordered nine additional episodes of the sophomore series THE RESIDENT, raising the second season order to 22 episodes, it was announced today by Michael Thorn, President, Entertainment, Fox Broadcasting Company. The provocative medical drama follows a group of doctors at Chastain Memorial Hospital, as they face personal and professional challenges on a daily basis.

“Amy Holden Jones, Todd Harthan and the amazing team behind THE RESIDENT have brilliantly offered viewers the ability to see the medical industry through a different lens,” said Thorn. “We can’t wait to watch the exceptional cast, as they continue to roam the halls of Chastain Memorial Hospital.”

In its Season Two premiere on Monday, September 24, THE RESIDENT delivered 8.9 million multi-platform viewers and a 1.7/7 L7 rating, its most-watched episode (excluding its post-NFC Championship premiere) and highest-rated telecast since February. That evening, THE RESIDENT, paired with 9-1-1, drove FOX to have its most-watched Fall Monday in four years.

In the all-new episode of THE RESIDENT, “About Time” airing Monday, Oct. 15 (8:00-9:00 PM ET/PT) on FOX, Chastain is flooded with concert goers when a stampede at a music festival grounds leaves many in need of doctors. As Conrad (Matt Czuchry) and Nic (Emily VanCamp) race to help Josh Robinson (guest star Tanc Sade), a professional adventure guide with a long list of prior injuries, Devon (Manish Dayal) works with a musician who swears he is sober, even though his toxicology report suggests otherwise. Meanwhile, Bell (Bruce Greenwood) stirs the pot when the hospital’s revered orthopedic surgeon, Dr. Kit Voss (Jane Leeves), demands a better resident, Julian (guest star Jenna Dewan) works to get her boss on Bell’s good side and Winthrop (Glenn Morshower) continues to push Conrad to believe he’s a changed man.

What do you think? Are you enjoying season two of The Resident TV series? Did you expect a full second season, or is this a pleasant surprise?

The Resident is terrific. Please renew for season 3.

I want to see more of the Resident!!

It’s a top notch show and a great variation on the hospital drama.