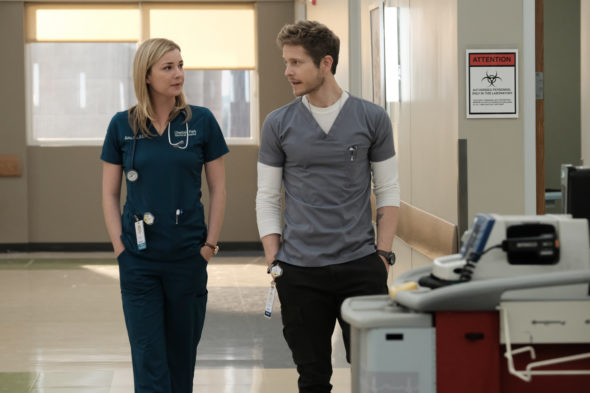 The patient has pulled through. FOX has renewed The Resident TV show for a second season. While the demo ratings haven’t been very strong, the numbers were apparently good enough to bring the drama back for season two and the 2018-19 season.

The Resident: A Look at the Ratings

The first season of The Resident is averaging a 1.05 rating in the 18-49 demographic and 4.61 million viewers. It currently ranks ninth and third (respectively) among scripted FOX TV shows but those averages are a bit deceiving.

The Resident series premiere aired on FOX immediately following the NFL’s NFC Championship game, between the Philadelphia Eagles and the Minnesota Vikings. Because of that terrific lead-in, it earned a 2.61 in the demo and drew 8.65 million viewers, which leaves the season average artificially high. If we ignore those numbers, The Resident‘s ratings are still pretty good but the series wasn’t a lock for a renewal.

In any case, The Resident will indeed return for the 2018-19 season. Here’s the press release:

FOX RENEWS “THE RESIDENT” FOR A SECOND SEASON

FOX has renewed its freshman medical drama, THE RESIDENT, for a second season.

“Amy, Todd and all the producers on THE RESIDENT set out to create a medical show that viewers haven’t seen before – to peel back the curtain and reveal the truth of what happens, both good and bad, behind the scenes at hospitals across the country. Clearly, they’ve succeeded,” said Michael Thorn, President, Entertainment, Fox Broadcasting Company. “Matt, Emily, Bruce, Manish, Shaunette and the show’s entire cast have turned in consistently heartfelt performances, and we are so excited to go back to Chastain Memorial for another tremendous season.”

In Season One’s all-new penultimate episode of THE RESIDENT, “Run, Doctor, Run,” airing tonight (9:00-10:00 PM ET/PT) on FOX, Conrad (Matt Czuchry) and Devon (Manish Dayal) race against the clock to save the life of a woman who is deteriorating fast from undetermined symptoms. Meanwhile, Bell (Bruce Greenwood) must remain calm when Austin (guest star Malcolm-Jamal Warner) impulsively pulls him into a procedure. Then, tensions rise as Nic (Emily VanCamp) continues her search for evidence to incriminate Lane (Melina Kanakaredes), but must simultaneously tend to her sister, Jessie (guest star Julianna Guill), who is rushed into the ER.

THE RESIDENT is averaging more than 10 million multi-platform viewers per episode, and improves its year-ago time period by +31% in the key Adults 18-49 demographic.

What do you think? Did you want FOX to cancel or renew The Resident for season two? Will yu watch season two? Sound off, in the comments.

Best show I’ve seen in years..It portrays the health industry like it really is – closest thing I’ve seen to reality in years. The public definately needs to watch this program…Its a real eye opener

Great show!! I am disappointed that the show eon’t Be back until September!!!!

My husband and I absolutely love The Resident! We were happy to find a well-written medical show with a talented cast and a look at what goes on in real corporations, behind the scenes, as well as the medical drama and the interpersonal relationships that develop. I also appreciated the way the medical team interacted with the patients. We hope the show continues for many seasons!

Thank you for a real show-one that makes us think. It truly is a great show- one of the very few-that makes us eager for the next week!

Please do not cancel the resident. It is my most favorite TV series.

I love The Residence, my daughter and I love this show very much. All performers do a great job. I really hope it continues for many years to come. #theresidencesrocks#theresidencesgoingstrong

I would really love for this show to continue, really captivating.

I love this show! Please don’t cancel it reminds of ER. I watched every episode!!

They need to make more than just 2 seasons…. this is an amazing show

I love this show. Best medical show since ER!!!! I’m extremely happy that there will be a second season. Thanks to Hulu for showing it. I will make sure to watch “The Resident” during it’s normal air time!!!!!!!

Please don’t cancel The Resident, it’s a show that really is worth watching!

Love the show, keep it coming

This household absolutely LOVES The Resident and we look forward to it! So new, such a refreshing change from other medical programs. Can hardly wait for next season – hope it will be soon!