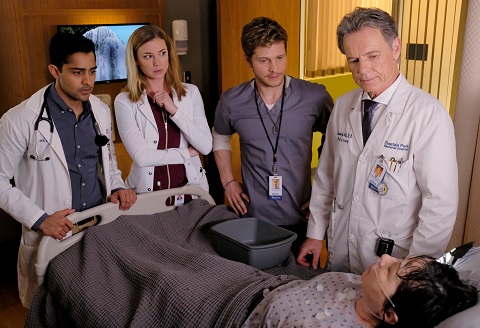 The show “centers on a tough, brilliant senior resident who guides an idealistic young doctor through his first day, pulling back the curtain on what really happens, both good and bad, in modern-day medicine.” The cast also includes Matt Czuchry, Manish Dayal, Bruce Greenwood, Emily VanCamp, and Shaunette Wilson.

We’re trying to show the general audience what they don’t know that goes on in hospitals so you can protect yourself. … It’s a female empowerment show. I’m a woman. Our staff is half female in the writers room as we’re trying to get as many female directors as we can. My take on the (topic of) sexual harassment was how my career was impacted. While I was never a victim, after four features they wouldn’t allow me to direct.”

I loved the pilot and thought it was relevant to what’s happening today. I get to be a champion for all nurses who are so undervalued, underpaid and who do most of the work.”

What do you think? Are you a fan of medical dramas? Will you watch The Resident?

Yes I am. I love The Resident and all the medical show long with all the Chicago shows.