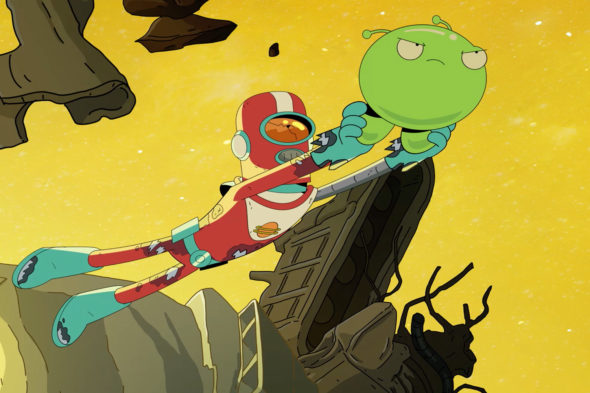 Turner is saving a space for Gary and Mooncake. Olan Rogers’ Final Space TV show has been renewed for a second season on TBS. Below, watch a short documentary on the series, from its creator and star.

A TBS animated comedy, Final Space also stars Fred Armisen, Tom Kenny, David Tennant, Tika Sumpter, Steven Yeun, and Coty Galloway. The serial sci-fi sitcom centers on Gary (Rogers), who has been serving out a prison sentence on the Galaxy One. While working off his crimes, Gary meets a green alien, Mooncake (also voiced by Rogers), but doesn’t realize his cute little buddy is a planet destroyer. Meanwhile, the evil Lord Commander (Tennant) is hot on his trail.

Chookity Pok! TBS has renewed its original animated series Final Space for a second season. Born from a seven-minute pilot created by “Tennessee wonder child” Olan Rogers, the intergalactic space saga is TBS’ youngest- skewing original series to debut on the network, reaching more than 20 million viewers across TBS’ linear, VOD and digital platforms. The series pick-up is the latest in a string of renewals for the network, which saw every original series renewed for additional seasons in the last year.

Final Space is created by Olan Rogers, an independent filmmaker, actor, comedian and entrepreneur with close to a million YouTube subscribers. Rogers starred in season one alongside Fred Armisen, Tom Kenny, David Tennant, Tika Sumpter, Steven Yeun and Coty Galloway. Rogers and David Sacks are writers and executive producers for the TBS original, which is produced by Conan O’Brien’s Conaco, New Form and in association with Turner’s Studio T.

Throughout the show’s first season, Final Space and Rogers interacted with fans in innovative new ways. The pilot premiered on Reddit ten days prior to the on-air launch; an AR app brought Final Space‘s most loveable [sic] characters to life; fans were treated to exclusive merchandise offerings via shop.tbs.com and starcadet.com; and “Cards with Gary” continued the show’s multiplatform storytelling by allowing Facebook users to work together and crowd source moves in a live, interactive card game. Final Space continues to find new ways to connect with Olan Rogers’ massive, passionate fan base, who have logged more than 27 million video views on social.

Fans and brands can look to engage with Final Space in even more ways in 2019. A variety of show extensions are planned to complement the series: branded content, fan events, consumer products, podcasts, interactive social, mobile games, app overlays, and live streams are all in development for fans and partners looking to connect.

What do you think? Are you a fan of the Final Space TV series? Do you plan to check out season two on TBS? Let us know below.

I love the show and can’t wait for mother loving season two. Mooncake is the bestest.chookity

Awesome news! I’m loving this cartoon. Plus, you can never have enough Mooncake in your life.