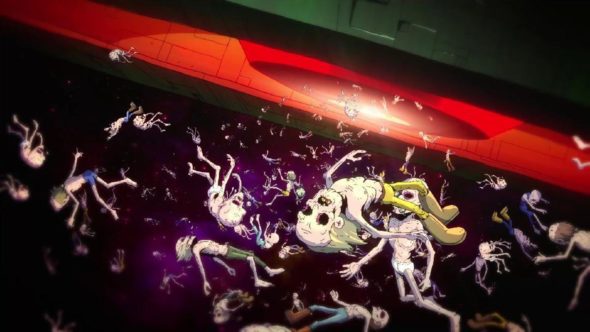 What fate awaits Gary? Is the Final Space TV show cancelled or renewed for a third season on Adult Swim? The television vulture is watching all the latest cancellation and renewal news, so this page is the place to track the status of Final Space, season three. Bookmark it, or subscribe for the latest updates. Remember, the television vulture is watching your shows. Are you?

The second season of Final Space averaged a 0.30 rating in the 18-49 demographic and 577,000 viewers. Compared to the first season on TBS, season two of Final Space is up by 31% and 26%, respectively. Learn how Final Space stacks up against other TBS TV shows.

Will Adult Swim cancel or renew Final Space for season three? I suspect Turner moved it from TBS (where the first season aired) to Adult Swim, to lessen the pressure. It’s doing well so, I think it will be renewed as long as the creators want to continue. I’ll update this page with breaking developments. Subscribe for free updates on any Final Space cancellation or renewal news.

Status update: Final Space has been renewed for a third season on Adult Swim.

What do you think? Are you glad that the Final Space TV has been renewed for a third season? How would you feel if Adult Swim had cancelled this TV show, instead?

I am older than the “average” fan I guess, but I love the series! I really enjoy the characters and the artwork is so colourful & fantastic, makes me want to hang out in space for sure. Please please renew, I’m not the only person waiting to see what will happen next, hurry.

I really like the show. It’s fun to watch. I hope that “Final space” wown’t be cancelled.
Not to offend anyone but for me is better than “Rick and Morty”.

Pretty cool show, made a big fan out of me,,keep it going, great work,

I think adult swim should definitely renew for final space season 3. If they don’t they are dumb. It is such a awesome show and everybody as well as me wants to know what happens to Gary and Quinn

You need to do a season 3!! You cant leave us on a cliffhanger like you did for the end of season 2. This show is hilarious and super entertaining. I could watch it all day. I finished both season 1 and 2 in a day because I could not stop watching. Please renew and DO NOT CANCEL!

Renewed?! ABSO-FREAKIN-LUTELY! Awesomely entertaining, funny, and smartly written and designed show. Rock-Strong increase in viewership for Season 2 over 1 proves many more agree and the more that have the opportunity to watch, the more that trend will continue.
The next Rick & Morty maybe? 😉

I know right, leaving us on a cliffhanger like that with Invictus. Damn.

I really cant belive that they left the 2nd Season like that, and if there is not another season I will go mental. The series is just too good.

I’m this old “google it meme” but I remeber me when I was waiting for Samurai Jack ending.

I really hope they keep going with another season! Its too good of a show to stop making.

Ano its jus awesome jus watched 2 seasons there in 2 days.. hope they make other shows like that if it gets cancelled but just hope they finish the story they set out to do on gary 🙂

I will be extremely disappointed if Final Space is canceled. I am 48 years old and I find the show emotionally exhilarating.

I hope they make another season. The show is amazing and the story line is so gripping.