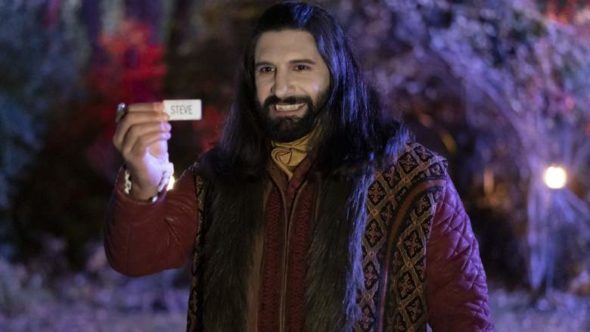 The vampires have escaped a Nielsen stake in the heart and will return for another year. FX has renewed the What We Do in the Shadows TV show for a third season.

A supernatural comedy series, What We Do in the Shadows stars Kayvan Novak, Natasia Demetriou, Matt Berry, Mark Proksch, and Harvey Guillén. Based on the feature film by Jemaine Clement and Taika Waititi, this TV show follows the nightly exploits of a group of vampire roommates — Nandor (Novak), Nadja (Demetriou), Laszlo (Berry), and Colin Robinson (Proksch) — as they navigate the modern world of Staten Island with the help of their human familiar, Guillermo (Guillén). In season two, the vampires try to find their way in a world with human Super Bowl parties, internet trolls, an energy vampire, as well as all the ghosts, witches, necromancers, zombies and shadowy cloaked assassins who roam freely in the Tri-State area. Plus, is Guillermo destined to be a vampire or a vampire hunter?

The second season of What We Do in the Shadows is averaging a 0.19 rating in the 18-49 demographic and 462,000 viewers in the Live+same day ratings. Compared to season one, that’s up by 3% in the demo and down by just 1% in viewership.

Here’s the press release about the third season renewal:

New Episode Airs Wednesday, May 27 at 10pm ET/PT on FX, and the Next Day on FX on Hulu With the Season Two Finale Set for June 10th

LOS ANGELES, May 22, 2020 – FX’s hit comedy series What We Do in the Shadows has been renewed for a third season on FX, it was announced today by Nick Grad, President, Original Programming, FX Entertainment. What We Do in the Shadows is currently airing its second season, which is averaging 3.2 million Total Viewers across all linear and non-linear platforms through the first six episodes, a +25% increase over the first season.

“We’re incredibly happy that critics and audiences are all in on Shadows,” Grad said. “Week in and week out, the producers, writers and our amazing cast continue to make one of the funniest and best comedy series on TV.”

What We Do in the Shadows ranks among the most critically acclaimed series on TV, with the second season scoring a perfect 100% on Rotten Tomatoes and a Metacritic score of 80 for universal acclaim. Critic reactions for season two include the following:

“brilliant show… . The dynamics among its cast of undead eccentrics are as sharp as ever” James Poniewozik, The New York Times (April 24, 2020)

“throwing a perfect game in its second season…every week it delivers an absolutely flawless episode” Michael Walsh, Nerdist (May 19, 2020)

“there’s no room for improvement to the perfection that is What We Do in the Shadows” Beth Accomando, KPBS.org (May 1, 2020)

What We Do in the Shadows returns with a new episode Wednesday, May 27 at 10pm ET/PT. In “Collaboration,” Nandor’s old familiar from the 1970s returns to Staten Island, Guillermo leaves to serve a new master, and Nadja and Lazslo revive their musical act. Written by Sam Johnson and Chris Marcil. Directed by Yana Gorskaya.

What We Do in the Shadows, based on the feature film by Jemaine Clement and Taika Waititi, documents the nightly exploits of vampire roommates Nandor (Kayvan Novak), Nadja (Natasia Demetriou), Laszlo (Matt Berry) and Colin Robinson (Mark Proksch) as they navigate the modern world of Staten Island with the help of their human familiar, Guillermo (Harvey Guillén).

Over the course of the second season, the vampires try to find their way in a world of human Super Bowl parties, internet trolls, an energy vampire who gets a promotion and becomes drunk on power and of course, all the ghosts, witches, necromancers, zombies and shadowy cloaked assassins who roam freely in the Tri-State area. Is Guillermo destined to be a vampire or a vampire hunter? Or maybe just a familiar for the rest of his life?

Clement, Waititi and Paul Simms are Executive Producers with Scott Rudin, Garrett Basch, Eli Bush and Stefani Robinson. What We Do in the Shadows is produced by FX Productions.

ABOUT FX
FX is the flagship general entertainment basic cable channel of FX Networks. Launched in June of 1994, FX is carried in 85 million homes. The diverse schedule features a growing roster of critically-acclaimed and award-winning hit drama series including Snowfall, Pose, Mayans M.C., Taboo and the upcoming Y: The Last Man; the critically-acclaimed limited series American Horror Story, Fargo, American Crime Story, FEUD, Fosse/Verdon and the upcoming Shogun; acclaimed hit comedy series including Atlanta, Better Things, What We Do in the Shadows and Breeders; the half-hour series Mr Inbetween; a slate of docuseries and documentary features, including The Weekly with The New York Times, The Most Dangerous Animal of All, and the upcoming AKA Jane Roe; and the FX Original Movie A Christmas Carol. FX is the former home of the critically-acclaimed and award-winning hit drama series The Shield, Nip/Tuck, Rescue Me, Damages, Sons of Anarchy, Justified and The Americans. The network’s library of acquired box-office hit movies is unmatched by any ad-supported television network.

What do you think? Have you watched the What We Do in the Shadows TV show? Are you looking forward to seeing season three on FX?

If this show gets cancelled I will riot. VLM (Vampire Lives Matter)

This is an absolute hilarious tv show!! Creepy Paper (crepe paper)-one of the cutest things:). Love it!!

Love this show! The play on human eccentricities is over the top! “Energy Vampire” was a top show for this series! Thank you for finally offering a show/series with some intelligence in writing, etc.! Appreciate the folks involved with this!