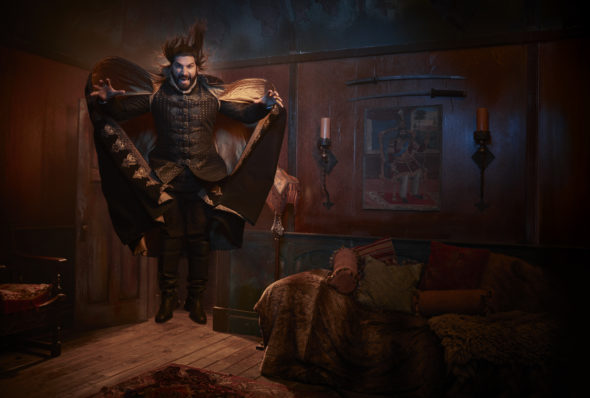 TV show description:
A supernatural comedy from creator Jemaine Clement, and based on the 2014 feature film from Clement and Taika Waititi, the What We Do in the Shadows TV show unfolds in Staten Island. The documentary-style comedy (i.e. mockumentary) centers on four vampires who have lived together for hundreds of years.

Once a great warrior and conqueror from the Ottoman Empire, Nandor (Novak) fancies himself the leader of the group. The problem is his Old-World style isn’t prone to achieving results in these post-modern times.

Something of a dandy, British vampire Lazlo (Berry) has a mischievous bent, and loves a good party. What he loves even more though, is watching Nandor fall flat on his face.

Nadja (Demetriou) plays Bonnie to Lazlo’s Clyde. A seductress at heart, she loves to spin a provocative yarn and provides great insight into the gang’s history.

Rounding out the foursome is Nandor’s familiar, Guillermo (Guillén), a human who protects and watches over his “master” during daylight hours. Guillermo dearly wants to be a real vampire.

There’s also an energy vampire in the mix. Colin Robinson (Proksch) is a day-walker who feasts on humans, but doesn’t drink their blood. Finally, there is community college student Jenna (Feldstein), a new friend of Nadja’s, who just can’t figure out why she’s suddenly dying for human flesh.

After their dark lord Baron Afanas reminds them of their 100-year-old mission to dominate the New World, the vampires have to figure out how to accomplish it. Meanwhile, the documentary crew follows them on their quest.

What do you think? Do you like the What We Do in the Shadows TV series? Should this FX TV show be cancelled or renewed for another season?

I love the show. I would hate to see it cancelled this soon.

F#cking love it, man. So dont f#l&ckin cancel it. thank you. have a great day.

Love the show especially the off color comments and the acting is great!

THE BEST SITCOM ON ANY CHANNEL IN YEARS!!