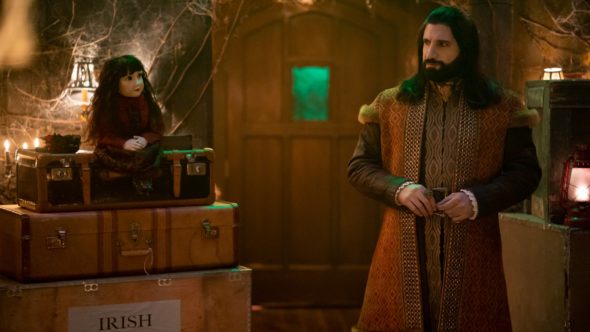 An FX horror-comedy mockumentary series, What We Do in the Shadows stars Kayvan Novak, Natasia Demetriou, Matt Berry, Mark Proksch, and Harvey Guillén. Based on the feature film by Jemaine Clement and Taika Waititi, this TV show follows the nightly exploits of a group of vampire roommates — Nandor (Novak), Nadja (Demetriou), Laszlo (Berry), and Colin Robinson (Proksch) — as they navigate the modern world of Staten Island with the help of their human familiar, Guillermo (Guillén). In season four, the vampires return to Staten Island to find their mansion on the verge of total structural collapse and they have no money to repair it. While Nandor’s eternal search for love finally yields results, Nadja finally realizes her dream of opening the hottest vampire nightclub in the Tri-State Area. Laszlo struggles with the question of nature versus nurture as he tries raising Baby Colin to be anything other than an energy vampire. And even Guillermo finds himself on a powerful emotional track that touches on his love for his family, and for others.