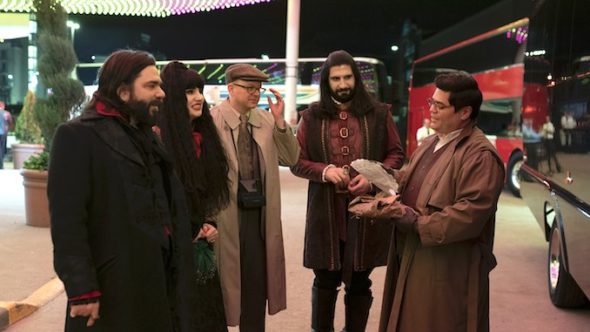 Is Guillermo a real threat to his masters? Has the What We Do in the Shadows TV show been cancelled or renewed for a fourth season on FX? The television vulture is watching all the latest cancellation and renewal news, so this page is the place to track the status of What We Do in the Shadows, season four. Bookmark it, or subscribe for the latest updates. Remember, the television vulture is watching your shows. Are you?

Airing on the FX cable channel, What We Do in the Shadows stars Kayvan Novak, Natasia Demetriou, Matt Berry, Mark Proksch, and Harvey Guillén. Based on the feature film by Jemaine Clement and Taika Waititi, this TV show follows the nightly exploits of a group of vampire roommates — Nandor (Novak), Nadja (Demetriou), Laszlo (Berry), and Colin Robinson (Proksch) — as they navigate the modern world of Staten Island with the help of their human familiar, Guillermo (Guillén). In season three, the vampires are elevated to a new level of power and encounter the vampire from which all vampires have descended, a tempting Siren, gargoyles, werewolf kickball, Atlantic City casinos, wellness cults, ex-girlfriends, gyms, and supernatural curiosities galore. Colin turns 100 and Nandor tries to inject his life with more meaning.

The third season of What We Do in the Shadows averaged a 0.14 rating in the 18-49 demographic and 379,000 viewers in the live+same day ratings (includes all DVR playback through 3:00 AM). Compared to season two, that’s down by 24% in the demo and down by 16% in viewership. While these numbers don’t include further delayed or streaming viewing, they are a very good indicator of how a show is performing, especially when compared to others on the same channel. There can be other economic factors involved in a show’s fate, but the higher-rated series are usually renewed and the lower-rated ones are cancelled. Find out how What We Do in the Shadows stacks up against other FX TV shows.

What do you think? Are you glad that the What We Do in the Shadows TV show has been renewed for a fourth season? How would you feel if FX had cancelled this TV series, instead?