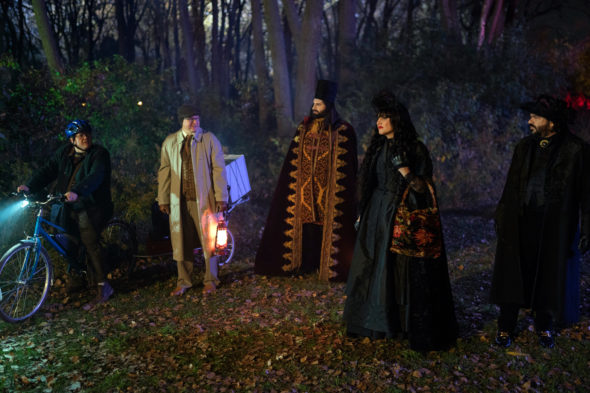 Will this show get staked? Has the What We Do in the Shadows TV show been cancelled or renewed for a third season on FX? The television vulture is watching all the latest cancellation and renewal news, so this page is the place to track the status of What We Do in the Shadows, season three. Bookmark it, or subscribe for the latest updates. Remember, the television vulture is watching your shows. Are you?

Airing on the FX cable channel, What We Do in the Shadows stars Kayvan Novak, Natasia Demetriou, Matt Berry, Mark Proksch, and Harvey Guillén. Based on the feature film by Jemaine Clement and Taika Waititi, this TV show follows the nightly exploits of a group of vampire roommates — Nandor (Novak), Nadja (Demetriou), Laszlo (Berry), and Colin Robinson (Proksch) — as they navigate the modern world of Staten Island with the help of their human familiar, Guillermo (Guillén). In season two, the vampires try to find their way in a world with human Super Bowl parties, internet trolls, an energy vampire, as well as all the ghosts, witches, necromancers, zombies and shadowy cloaked assassins who roam freely in the Tri-State area. Is Guillermo destined to be a vampire or a vampire hunter?

What do you think? Are you glad that the What We Do in the Shadows TV show has been renewed for a third season? How would you feel if FX had cancelled this TV series, instead?

So glad they renewed it for third season . I just discovered it by accident and love it.

Glad to see it renewed for a third season. Season 2 wasn’t quite as good as the first season but it was still good. Pretty funny, unique, only 1/2 hour long so it can’t be taken too seriously. Maybe that’s part of the appeal.