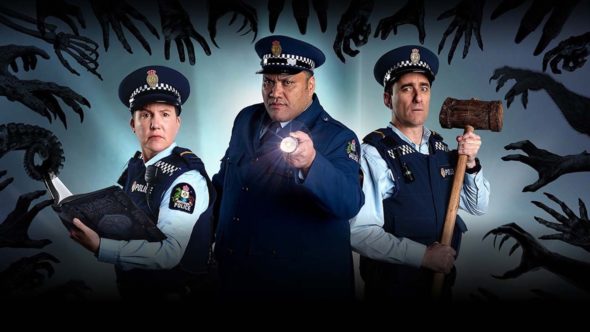 Wellington Paranormal is headed to The CW and HBO Max. A spin-off of FX’s What We Do in the Shadows the mockumentary comedy was also created by Jemaine Clement and Taika Waititi. The series follows the adventures of Officers O’Leary (Karen O’Leary) and Minogue (Mike Minogue) who appeared in the first season of the Shadows show.  A third season is currently airing in New Zealand, where the series originates.

The CW revealed more about the series in a press release.

“The CW Network announced today the acquisition of WELLINGTON PARANORMAL in partnership with HBO Max. A spinoff of the vampire mockumentary film “What We Do In The Shadows,” from award-winning creators Jemaine Clement (Flight of the Conchords) and Taika Waititi (Jojo Rabbit), the New Zealand based WELLINGTON PARANORMAL will make its U.S. broadcast debut on The CW. The horror-comedy series is slated for the network’s summer schedule. Dates and times to be announced at a later time.

WELLINGTON PARANORMAL marks the first co-acquisition of a primetime series between The CW Network and HBO Max. Every episode of the supernatural comedy series will first air on The CW and will be available to stream on the network’s free, ad-supported digital platforms (The CW app and CWTV.com) and WarnerMedia’s subscription-based platform, HBO Max, the day following its broadcast, throughout the season.

WELLINGTON PARANORMAL follows the adventures of Officers O’Leary (Karen O’Leary, What We Do In The Shadows) and Minogue (Mike Minogue, What We Do In The Shadows), hard-working members of the Wellington constabulary’s paranormal unit who, under the supervision of Sergeant Maaka (Maaka Pohatu, Savage), investigate supernatural occurrences that arise in the capital of New Zealand on a surprisingly regular basis.”

What do you think? Are you a fan of What We Do in the Shadows? Do you plan to watch Wellington Paranormal on The CW or HBO Max?

I LOVE this show. Have seen a few episodes of the first season, and it is fantastic!

If this is half as good as WWDITS it will be great! Can’t wait to see it!