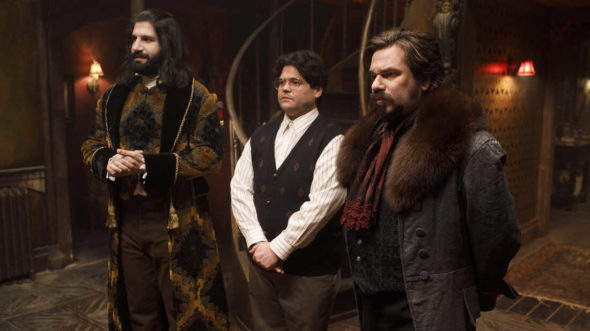 What We Do In The Shadows is returning for a fourth season next month, and FX has now released a trailer. Starring Kayvan Novak, Natasia Demetriou, Matt Berry, Mark Proksch, and Harvey Guillén, the supernatural comedy series follows four vampires and their familiar as they live in the modern world. The series, based on the feature film by Jemaine Clement and Taika Waititi, has already been renewed for seasons five and six.

FX teased the following about the fourth season in a press release.

“What We Do in the Shadows follows four vampires, and their human familiar, who’ve “lived” together for hundreds of years. Season four continues to make the case for blood and comedy with more strange beasts, surprising guest stars and tap dancing than ever. And this time with just a touch of home renovation.”

What We Do in the Shadows returns on July 12th. Check out the trailer below.

What do you think? Are you excited about the return of this FX series?

Yes I am. Love this show